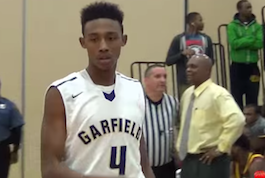 Rolling back to my hometown of Cleveland for the holidays, it was a necessity to get my fix of high school hoops in. While scheduling conflicts with Cavs games interrupted things, I was still able to hit a couple of scrimmages with some of C-Town’s legit squads. I shot over to Maple Heights to watch their gritty squad against a Lakewood team that was depleted by injuries, yet still playing the exciting brand of basketball that former Kentucky player Phil Argento implements. I then drove down Libby road to see Garfield Heights take on a Shaw team that was loaded with young talent. Garfield coach Sonny Johnson has produced more D-1 talent than any coach in the city and showcased a squad with no shortage this go around. All in all, it was a great day of local hoops that showcased a few of the best that Cleveland has to offer.

Here are a few of the top guys that caught our eye:

One of the hottest names in the state of Ohio, it almost seems like Frankie Hughes (video above from earlier this year) is adding another offer every week. Having grown to 6’4, he has the size to play the 2 and is developing the game of a potential 1. Frankie is an improving creator off of the bounce, can shoot the lights out of the ball, and is a threat to dunk on you in transition. He’s not a guy who is going to blow you away with any particular facet of his game, but a smooth operator who is going to constantly keep going at you. Minnesota just offered him a scholarship and while he has close to 20 offers from low to mid-major programs, BCS schools are inquiring about his services on the regular.

Generously listed at 5-foot-10, don’t let Marreon Jackson’s height fool you.  An incredibly competitve lead guard, Jackson has a basketball IQ unlike most playmakers his age. He makes pinpoint passes, rarely turns the rock over, and can stroke it out to the NBA line. His size and ability to finish in the paint are concerns, but that didn’t stop Michigan head coach John Beilein from openly talking about how much he loved the sophomore’s game.

Just a freshman, Lemaro White showed that he could hold his own against one of the city’s best squads. With nice size for a young playmaker, he was able to create scoring opportunities for himself and finish once he got in the paint. Though his career is still in its infancy, Lemaro has all of the makings to be a serious D-1 prospect down the road with his ability to impact the game on both ends of the hardwood.

An all-energy team type guy, Johnson was had the most dominant performance of anyone that we saw on the interior. He rebounded the ball outside of his area, provided outstanding hustle play on both ends, and threw down a number of powerful dunks. While his skill level still needs some work, the potential and intagibles that he brings to the table were enough for Alabama State to sign him for a full ride.

The best passer that we saw all day, Leisinger constantly found the open man throughout Lakewood’s truncated game against Maple. He exhibited nice vision both in transition and in the half court, finished with his left hand, and rebounded the ball well for a guard. Not a D-1 prospect, Leisinger will need to get stronger and improve defensively, but will find a home at one of the countless D-2/D-3 programs in the Midwest.