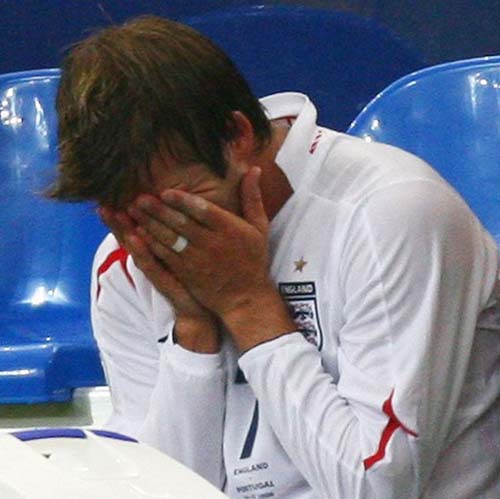 Hey, if Sam can post about football, so can I.

Today, midfielder David Beckham became the highest-paid anybody in anything to leave Real Madrid and join the L.A. Galaxy of the MLS. The deal, somehow, will pay Becks $250 million over the next five years. It’s hard to believe that the entire MLS—let alone the Galaxy—is worth that much. And the general consensus is that the 31-year-old Beckham is pretty much washed up anyway. England dropped him as the captain of the national team, and he hasn’t even been playing for Madrid.

Still, he’s undoubtedly a huge name, and will give the MLS some much-needed publicity worldwide (at least among Asian schoolgirls). And of course Victoria “Whatever Spice” Beckham will do her best to save the faltering Beverly Hills economy by spending a large portion of her husband’s fortune at every boutique and plastic surgeon’s office she sees.

But $250 million? It’s amazing. I can’t even think of an equivalent to this. I suppose it would have been like Barcelona (the basketball team) giving Michael Jordan a $250 million deal when he retired…from the Wizards. Or the Yomiuri Giants throwing the same quarter-bill (yikes) at Barry Bonds. I guess the closest deal there’s been was when the Knicks gave Allan Houston $100 million when no one else was even thinking about anything even close to that number. And we all know how THAT turned out.

I don’t see how one player can be counted on to turn a league’s fortune—and that’s the kind of pressure that this deal puts on Beckham. I can’t foresee a flood of European stars following Becks to America, at least not ones in their prime. At best the MLS will be where aging stars float down on their golden parachutes, and that’s not good for anyone. Well, except the guys collecting the checks.