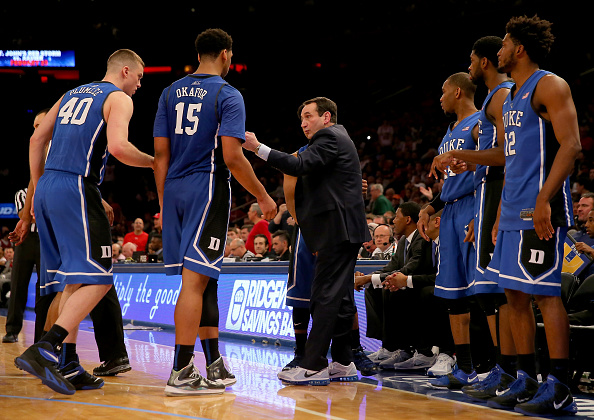 The Duke Blue Devils used a big second half to come from behind and beat the St. John’s Red Storm, 77-68 at Madison Square Garden on Sunday. The win was Coach Mike Kryszewski’s 1,000th and he is now the only coach in D-I history to reach that total.

The victory didn’t come easy. Down by 10 and on the ropes with 8:35 left in the game, the Blue Devils went on a six-minute 18-2 run led by freshman point guard Tyus Jones and center Jahlil Okafor to seal the win. Jones finished with 22 points, 6 assists and 4 rebounds and Okafor bullied his way to 17 points, 10 boards, 2 assists and 1 block while Phil Jackson and Carmelo Anthony watched from the stands.

The Red Storm took a 43-39 lead into the half after senior guard D’Angelo Harrison hit a shot clock-beating three-pointer. The Johnnies carried the momentum into the second half and stretched the lead to eight with 15:15 left. Senior forward Sir’Dominic Pointer was causing havoc all over the floor and finished with 21 points, 10 boards, 4 assists, 3 blocks and 3 steals. Sophomore point guard Rysheed Jordan was equally as impressive with 18 points, 4 boards, and 3 assists.

St. John’s was able to effectively get in the paint and finish by pushing the tempo and forcing Duke to play an up-and-down game. With 11 minutes to go and Duke down 57-49, Coach K made an unexpected substitution when he put in reserve big man Marshall Plumlee in place of Amile Jefferson. With Okafor and Plumlee up front, the Blue Devils were able to take advantage of St. John’s undersized front court, and Duke’s physical presence and rebounding was a big enough factor to change the course of the game. On the road in front of a hostile crowd, a young Duke team with an old coach grew up quickly and survived down the stretch to lead Coach K to the historic milestone.

“We didn’t feel any pressure, but at the same time we knew we wanted to win this game for [Coach],” said Tyus Jones after the game. “We didn’t want to lose this game when we knew we could win at the Garden and make it a special moment for him…We did all we could for him. He didn’t say anything specific about the 1,000th but we know how special this is for him. It’s really unbelievable that he has 1,000 wins.”

“Coach K’s main focus is to make sure we weren’t stressed out about the [1,000th win] or we weren’t overhyped,” added Okafor. “We wanted to come here and finish our non-conference schedule undefeated so he did a good job.”

Following the final horn, Duke players, coaches and personnel donned “1K” t-shirts and hats and surrounded their coach giving the win more of a Final Four feel than a regular season non-conference game in January.

“It was tough to get involved with 1,000 wins. I was just trying to focus on the game,” said Coach K during his post-game press conference. “There was a little while there when it looked like we weren’t gonna make it. I am glad its over—I am honored. Don’t get me wrong. I am the lucky guy. I have been at two great institutions in Army and Duke. Never had a day to worry about my back… To do it here and have seven of my nine grandchildren and two of my three daughters and my wife, it has always been a family thing, I am glad we were able to share it here today.”

For Duke, Quinn Cook finished with 17 points, 4 rebounds and 2 assists and Amile Jefferson scored 11 while grabbing 3 rebounds. The win puts their record at 17-2 (4-2) with road games against No. 8 Notre Dame and No. 2 Virginia coming up this week.

Phil Greene IV finished with 13 points and D’Angelo Harrison scored 12 on 5-14 shooting for the Red Storm. Steve Lavin’s team sits at 13-6 (2-4) and will take on Creighton on the road on Wednesday night.