Long Way From the Sun Belt 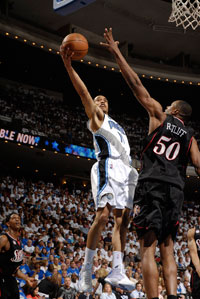 On the eve of his first NBA playoff series, Orlando Magic rookie Courtney Lee took a modest tone when reflecting on the last year of his life. A year that saw the shooting guard make a Cinderella run to the NCAA Tournament’s Sweet 16, hear his name called in the first round of the 2008 draft and move his way into the starting lineup for a franchise with the fourth-best record in the NBA. After all of that, Lee could only be grateful and complacent.

“Coming to the Magic and getting a chance to play,” says Lee, “it’s been a positive journey.”

What? That’s it? Starting more than half the games you appear in as a rookie for one of the top teams in the League certainly entitles a player to a little more than “it’s been a positive journey.” That’s just how Lee is though; it’s how he’s always been.

So really, it shouldn’t have come as much of a surprise when Lee calmly dropped 18 points in his postseason debut on Sunday against the Philadelphia 76ers, more than doubling his regular season scoring average. Oh, and did we mention that Lee was the only Magic player on the floor for more than 40 minutes?

You see, for Courtney Lee, his entire basketball career has been about overcoming hurdles and exceeding expectations. It’s been about taking the losses and hardships and coming out a

better player and a better person because of it.

After finishing second in the Indiana Mr. Basketball voting as a senior in high school and seeing dozens of major programs pass on him, Lee went to Western Kentucky and rewrote the record books, finishing as the school’s all-time leading scorer. After losing his teammate and best friend Danny Rumph to an undetected heart condition during his freshman year, Lee rededicated himself to the game of basketball and was named Sun Belt Rookie of the Year. And after three years of missing out on the NCAA Tournament, Lee led the Hilltoppers to a pair of upsets and a birth in the Sweet 16 during his senior season.

Lee tackled every obstacle straight on, never once flinching, never once taking the easy way out and blaming bad days on the loss of his friend, or lack of national respect on a small conference. So was it any surprise what the Orlando coaching staff liked most about Lee prior to drafting him?

“He has a good basketball IQ and a real understanding of his game,” says Magic assistant coach Steve Clifford. “But really it was his maturity that stuck out the most.”

The sweet shooting two-guard brought his maturity and his game to Orlando where he found himself third on the depth chart behind J.J. Redick and Michael Pietrus. While most first round selections find themselves worrying about earning their pay and grabbing as much playing time as possible, and Lee certainly was, the newcomer also found himself doing his best to get comfortable with his new teammates.

“I felt like I was able to fit, but it took a little while,” Lee says. “Before the season, Jameer Nelson held a little retreat

up in Philadelphia for the guys, so I got to know them there. Then we came in training and played pick-up together and the chemistry starting building from there.”

It was a chemistry that teammates and coaches noticed from an early point in the season. The coaching staff in particular pointed out Lee’s ability to carry himself in a quiet, confident manner, while also managing to stay extremely personable; a trait that has made him popular with the team.

On the court, Lee was making strides in his game as he adjusted to the faster pace of the NBA, but still the rookie wasn’t without the occasional star struck moment as he worked his way through his first weeks in the League. A preseason match up with the Miami Heat provided Lee with his first abrupt welcome to the professional scene.

“It was an early game in the season, I got the start and I had to check DWade,” he says.

Wade went for 29 and Lee sputtered with a two spot. Still, there was reason for optimism from Lee and the coaching staff as the season progressed through the winter months. There was a 19-point showing on December 3 vs. Minnesota and 16 points on the road at Golden State just two weeks later. By January 6 Lee was making his first start and since February 20 he has started in every game at the off-guard spot.

While Lee has been a steady offensive presence, dropping 8.4 ppg and stroking the ball from deep at a rate better than 40 percent, largely overlooked has been the young guards defense. In college, Lee was a defensive stalwart and down the stretch of the regular season he emerged as the top perimeter defender on one of the NBA’s best defensive units.

Lee’s approach to the other side of the ball, while aggressive and effective

, is much more simple than his coaches would have you believe.

“Coach said if you want to play, you better play defense. So I had to step up my defensive level and intensity.”

Short and sweet, that’s how Lee likes to keep it. Of course the beauty of that is how accurately it portrays his sudden ascent to notoriety in the NBA. It’s been fast, but oh so sweet. One year ago Lee was in Florida at the famed IMG Academy training in preparation for individual workouts. A few weeks prior to that, he was playing for a team no one expected to make it past the opening weekend of the NCAA Tournament. Today, Lee finds himself starting for a team that has a wealth of expectations to perform well and achieve in the postseason.

In the span of 18 months the Indiana kid who wasn’t good enough to be named Mr. Basketball has gone from playing at the Diddle Arena to showing his stuff in front of a national audience. He’s gone from being a local sensation in Bowling Green, KY, to an integral part of a team looking to make a run at an NBA Championship. Lee has taken it all in stride, never getting ahead of himself and never taking it for granted. If anything, the rookie who the Magic took a chance on because of his maturity, has only gotten wiser as the season has progressed.

“I feel like I’ve matured a lot during this first year,” Lee says. “I don’t feel like a rookie anymore and the guys don’t really treat me like one.”

The growth that Lee proclaims he has undergone hasn’t been overlooked by coaches either. The Magic staff has repeatedly voiced how impressed they are with their young guard’s ability to cope with the difficulties of playing in the NBA right away.

“I think Courtney has handled the rigors of this level surprisingly well,” Clifford says. “He’s played major minutes and has had very few periods of the year where he wasn’t playing at a high level, which you don’t see quite often with guys in their first year.”

So now Lee and the Magic wait for game two in their opening round series with Philadelphia. Having already logged more than double the playing time he ever did in college and with the possibility of a long, grueling postseason ahead of him, Lee doesn’t seem to be worried.

“I think I’ll be okay,” he says. “I just need to make sure I take care of my body at this point in the year.”

Simple and modest, but that’s just how Courtney Lee is.