A Night at the Dean Dome 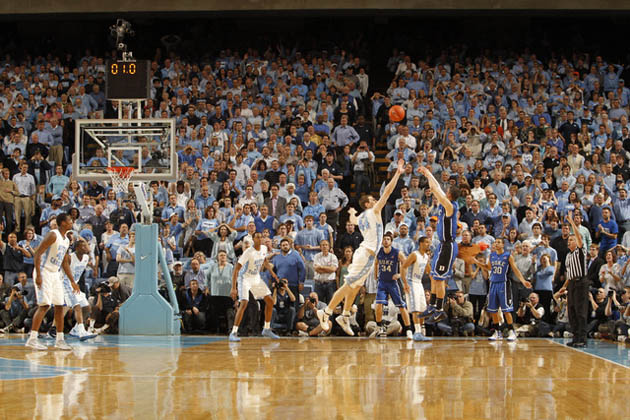 The regional jet dropped through the clouds and settled onto the runway at Raleigh-Durham International Airport, a brand new, modern building that sits among bucolic rolling hills in the midst of a college basketball war zone. Just a few miles from the airport, equal points on an imaginary isosceles triangle, Duke University and the University of North Carolina are located just eight miles from each other.

In a few hours, UNC and Duke are scheduled to face off at UNC. Carolina enters the game at No. 5 in the AP poll, Duke at No. 10. They are closing in on a century of competition, and have played over 130 times. Coming into this game, over the last 75 matches Carolina holds a 38-37 lead. Incredibly, over that 75 game span, Duke leads in cumulative score 5,858 to 5,857. Since 1991, Duke has won four National Championships, while UNC has won three. In that time span, they’ve combined to go to the Final Four 16 times.

Despite their shared dominance, or maybe because of it, they just don’t get along. As former Carolina guard Joseph Forte once said, “They hate us, just like we hate them.” This is a rivalry, and rivalries thrive in sports. Sports are about conflict and competition. Each day, athletes square off in personal confrontations that are microcosms of the larger battles that occur between their teams, the battles and wars that for the fans make life worth living.

As humans and as fans, we feed off the passionate pursuit of a prize, and these rivalries provide us with concrete answers. We know, definitively, which team is the best, at least until they meet again. Bragging rights are established, supremacy is identified. These rivalries are reliable escapism, a respite from the doldrums and struggles in our personal or professional lives. Fans live vicariously through these schools and franchises. We imagine ourselves on the field or the court, wearing our team’s colors, and we get charged up over the raw emotion and talent on display. In the larger sense, we gravitate toward sports because they provide us with camaraderie and community. We stand arm in arm or shoulder to shoulder with our fellow fans, a band of brothers who want nothing more than to prove that we chose the correct team to support.

In this case, it’s light blue or dark blue.

I have nothing against college basketball. I was fortunate to grow up in Atlanta just a couple of miles up the street from Georgia Tech while Bobby Cremins was running the program. When I was in lower school, a family friend took me to a GT basketball game, the first live basketball game I’d ever seen. Tech was playing a sacrificial lamb, one of those traveling teams like Marathon Oil or Athletes in Action, and the stands were maybe half-full. The arena at Georgia Tech is a bowl, sunken into the ground, topped with an arched roof that makes the arena seem like a dome—fans call it The Thrillerdome. By modern college basketball standards, it’s tiny, holding no more than eight or nine thousand people.

I still remember walking into the arena, seeing the wooden floorboards glowing, hearing a brass band blaring away. It was like entering a new universe, and a journey that changed my life forever. In some settings, I discovered that day, perfection is just a little bit imperfect.

Over the next few years, Tech had a steady stream of All-ACC players come through town, from Mark Price to Duane Ferrell to Tommy Hammonds to Dennis Scott to Kenny Anderson to Stephon Marbury. It was a remarkable run, and I saw Tech play against some of the best players in college basketball, from Len Bias to Christian Laettner. The Atlanta Hawks shared time with the Yellow Jackets as my favorite teams, and eventually I ended up at University of Georgia, where football is king. With time, my interest in college basketball began to wane, and before long I was working at SLAM and neck-deep in the NBA.

I visited UNC with a group from Jordan Brand, and we were given the full tour. We walked through the Carolina basketball offices, where everywhere you look hangs an iconic image from UNC hoops history. NBA jerseys from several UNC players are displayed—on this day there were jerseys from Marvin Williams and Vince Carter, among others. (At press time, UNC has a dozen former players in the NBA; Duke currently has 15.) One of the guys from the UNC Basketball Office casually noted, “I rotate these out,” a nice way of saying there were plenty more where these came from.

From there we walked out onto the court of the Dean E. Smith Center. It was about six hours before game time, and the building was empty. Out on the floor shooting around were former Heels Shammond Williams and Jackie Manuel, getting in a quick workout before the big game. A few minutes later, we ran into Rasheed Wallace, in town for the game. Several times we heard UNC basketball referred to as “family,” a place you never leave, where former players are always welcome. Seeing those random guys throughout the day served to reinforce that.

A few hours later, Coach K leads his Duke team out onto the Dean Dome floor. The Dean Dome is almost full of fans, 21,750-strong, in varying shades of Pantone 278, better known as Carolina blue. The UNC players are wearing their new UNC-shaded Jordan 2012s, and the Duke players are wearing their black uniforms, fitting for their role this evening as villains. Men with shirts and ties serve as ballboys, and the fans sitting around us in the upper deck, speak knowledgably about UNC’s rotations and depth issues.

The game begins with fits and starts, as UNC somehow gets 19 and 11 in the first half from Tyler Zeller, their center who doesn’t quite seem at ease on the court. Just before the half, UNC’s Harrison Barnes gets a steal and bucket, and the arena is so loud I have to plug my ears. Barnes comes out strong in the second half, and UNC builds a lead. Duke has no interior presence, and after starting strong from the outside, can’t make any jumpers for most of the game.

Then, down ten with just over 2 minutes to go, everything changes. Duke can’t miss, UNC can’t even make a free throw. Even Zeller scores a bucket for Duke. Finally, Zeller hits a free throw to put UNC ahead 84-82. With Duke out of timeouts, they inbound the ball to Austin Rivers, who brings it up court with UNC’s Reggie Bullock guarding him. Duke’s Mason Plumlee sets a pick for Rivers, and Zeller switches onto Rivers. Recognizing the mismatch, Rivers runs to the right wing and isolates against Zeller, who stands there with his hands at his waist, as though he is waiting for Rivers to give him a dap. Rivers bounces the ball four times, steps forward until he is about six inches behind the three point line, then rises up and fires a three pointer just over Zeller’s right arm.

The buzzer sounds tenths of a second before the ball settles into the net. Rivers sprints to the other end of the court, and is quickly engulfed by Duke players. The UNC crowd, so loud and so fired up earlier, suddenly goes completely silent, as if someone hit a mute button. Another game, another memorable chapter in the most memorable rivalry in college sports.

As we all file out of the Dean Dome, a girl behind me cries, and her friends comfort her. College basketball may have its faults, but there is a fragility to college basketball that doesn’t seem to exist in the NBA. Despite the billion-dollar machine around college basketball, these are still spindly kids playing the games, and fans who have invested, usually literally, in these programs. They rise and fall, they live and die, with each and every game.

Maybe it doesn’t matter whether or not the players are being compensated. Winning is fantastic, and losing, particularly on this night, is shattering. No matter how much money is involved.