Watching hundreds of people come to play basketball—showing up on-time, in full uniform, excited for their next game… it sets things into perspective.

From the sidelines of ABC Hoops NYC‘s naturally lit hardwood gym in Hell’s Kitchen in New York City, co-founder Jeff Yuan and Alex Bodenmiller are around basketball from 10 a.m. to 9 p.m. every weekend.

They’ve seen the league grow from just six teams in its first season to over 30, as it wraps-up its fifth tilt this weekend. The two have yet to miss a game.

In a city full of indoor rec leagues—and with word of mouth as its primary marketing strategy—the question must be asked: Why have people been joining ABC Hoops NYC… and staying there?

The league was created on the principle that every player deserves a piece of the spotlight. ABC Hoops NYC’s belief is that basketball can be enjoyed by everyone, and that every player, in his own eyes, is a star.

This philosophy is evident at every game. Regardless of competition level, a minimum of three stat keepers, two certified referees and a photographer are present.

Game results, extensive stats and photos are uploaded to the league’s website almost immediately. Throughout the week, the site is updated with videos, power rankings, weekly previews, players of the week and more.

Bodenmiller built the site from scratch, aiming to make everything intuitive and easy to find.

“It bothers me when you go to a company’s website and it’s not intuitive and doesn’t look good,” he explains. “It really makes a statement about who they are. So I really wanted to take our site seriously and put a lot of work into it.”

The website has become a regular destination for many players. Features such as Meet The Player reflect ABC’s focus on building community.

“I appreciate [ABC Hoops NYC] for choosing me for Meet The Player because I like to tell people what I’m about and expose another side of me,” says Will Modeste, who’s entering his fourth season with ABC this summer. “When I play, people always look at me like I’m mean. But I’m not really a mean guy. When you’re focused and have a determination, sometimes people look at it the wrong way. But I just want to show the lighter side of myself.”

Most importantly, the website reflects a basketball league rooted in sportsmanship, competition and love for the game. ABC Hoops NYC is as much a place to play basketball as it is a place to network and build new professional relationships.

“You have teachers, bankers, doctors, singers, musicians,” Yuan says. “You have people who dabble in anything. It’s cool to see everyone interact in this infusion of different personalities but sharing a common interest of basketball.”

ABC Hoops NYC aims to not only provide a competitive environment to play basketball—but also to foster a community that loves the game. The results have been clear: players not only return for upcoming seasons; they play with blood, sweat and tears.

“The best part of [ABC Hoops NYC] is the love for basketball,” says Herman Matista, who played professionally in the Dominican Republic and has been with ABC since its first season. “If they’re doing this, they really love the game. They like to see people play. The environment, it feels like, Oh, basketball! No matter if you were drinking that night, you’re still going to come in and give your best over here and play ball.”

Many NYC rec leagues are expensive and unorganized, and as a result, return rates are notoriously low. That’s not a concern at ABC.

“We really want to have fun and we understand how expensive leagues are in the city, to the point where, unless you have a corporate sponsor, you’re not really going to be able to do it,” Yuan explains. “We strive to keep everything low. There’s no reason why we can’t, as much as we’re physically able to do it.

“We really just want people to play basketball and see what we offer,” continues Yuan, “and the one way to do it is to make it affordable for the average working person in New York.”

Being priced significantly less than the competition helps, but going the extra mile—such as giving away Jordan IVs to the winner of the league’s three-point contest—is a key factor behind ABC Hoops NYC’s success.

“When I saw the stats and the pictures, I knew they were pretty good at what they do. When I played my first season, I knew I had to play season-in and season-out,” Modeste says. “As they added extra stuff like the three-point contest, it makes the members want to stay that much more.”

“This is a recreational league, and they do just as much as the professional league that I play in,” Modeste explains.

In addition to expanding to a three-on-three outdoor tournament and an all-women’s league, Yuan and Bodenmiller have their sights on adding functionality to the site so that more players will be able to connect with one another to play basketball. Adding live stats, shot charts and advanced stats to players’ individual profiles could soon be a reality as well.

SLAM and XXL have assembled a team to play in ABC’s first-ever weekday league this summer. You’ll be able to follow the team on SLAMonline and ABCHoopsNYC.com, with photos and stats from each game.

That’s real hoops. Just as it should be. 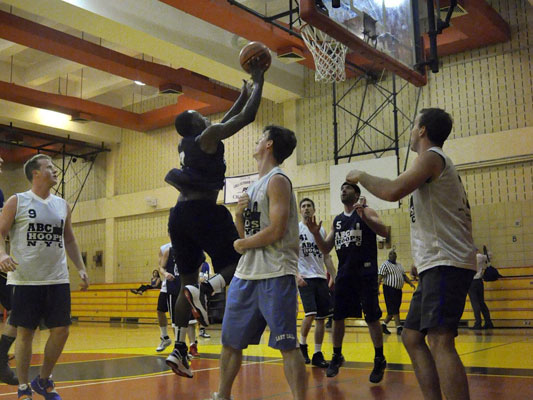