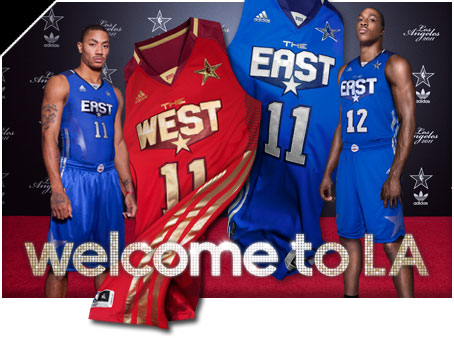 In next month’s All-Star game, we’ll see some new faces, and also some new gear. Earlier this week, adidas debuted the new uniforms, the first-ever TECHFIT PowerWeb jersey option and footwear for All-Star weekend. Here’s the press release, from news2know.net:

The NBA All-Star uniforms are inspired by the glitz and glamour of Hollywood and, for the first time ever, NBA All-Stars have the option to wear an adidas TECHFIT PowerWeb compression jersey or NBA Revolution 30 jerseys.

“Los Angeles is an exciting convergence of sports, style and entertainment unlike any other place in the world,” said Lawrence Norman, adidas Vice President, Global Basketball. “Our latest on-court uniform design and innovation, as well as our off-court footwear and apparel, celebrate the city and the game of basketball. NBA All-Star is the premiere event for adidas to showcase our innovations on basketball’s biggest stage and there is no better time or place to show basketball fans around the world how our products make the best athletes in the world, lighter, faster and stronger.”

The new NBA All-Star uniform design pays homage to Hollywood with big bold block typeface inspired by the Hollywood sign, and the East and West team names featuring the Los Angeles skyline embossed in the lettering to further recognize the city. Paying tribute to the diamond anniversary (60th game) of the NBA All-Star Game, the uniform features an integrated diamond pattern that stands out under the arena lights.

The on-court warm-ups are designed to mimic a three-piece suit often seen on the red carpet. Warm-up jackets feature cuffs in the standard formal three snaps and have an embellished internal pocket similar to a suit coat, while the lining of the jacket has the same print as the uniforms to tie in the premium and stylish red carpet look.

A full range of NBA All-Star apparel from adidas including shooting shirts, shorts, pants, track jackets and other collections is available for fans at the NBA Store at Jam Session, retailers across Los Angeles including the adidas Sport Performance Store at the Third Street Promenade in Santa Monica, Calif. and NBAStore.com.

The second version of Derrick Rose’s signature shoe, the adiZero Rose 1.5 is lighter and more supportive than its predecessor because of a new formulation of SPRINTSKIN, which is directionally engineered to provide optimum reinforcement, superior breathability and increased durability. adiZero Rose 1.5’s three-paneled SPRINTSKIN zones represent each of Derrick’s brothers (Reggie, Allan, and Dwayne) who helped support him through his journey to the NBA. Rose will begin the All-Star Game in a yellow colorway of the adiZero Rose 1 and debut the adiZero Rose 1.5 in the second half.

Rose’s East squad teammate in the paint, five-time NBA All-Star Dwight Howard, will debut the adidas Super Beast on the court for the first time at NBA All-Star which features an all-new support system built for his unique style of play. The

double stacked Z shaped TORSION SYSTEM features two deep grooves that run along the arch that allows the foot to easily rotate or twist inward, but slow the rate that the ankle can roll outward. This simple solution limits injuries and increases the body’s energy efficiency.

The adiZero Rose 1.5 and Super Beast roll out beginning February 18 for MSRP $100 at Foot Locker, and will roll out in various colorways through April.

adidas will also re-issue the iconic Crazy 8, which also features PURE MOTION technology that follows the form and function of the foot for fast, versatile players. The Crazy 8 will roll out in multiple colorways in February for MSRP $100.

In Los Angeles, NBA All-Star Jam Session presented by adidas provides fans the once in a lifetime experience of participating in the NBA All-Star excitement. Fans have the opportunity to meet and collect autographs from NBA Players and Legends and see some of their favorite NBA players, mascots, dance teams, and celebrities. Jam Session is non-stop basketball action where fans can indulge in everything basketball from comparing hand and shoe size to competing in skills challenges or getting basketball tips from NBA Players and Legends. Fans will have the opportunity to jump on the adidas court to take part in a variety of events and exhibitions. The NBA All-Star Jam Session presented by adidas will take place at the Los Angeles Convention Center from Feb. 17-21. For event times and schedule visit, www.NBA.com/jamsession.

adidas has been providing innovative products for the world’s best athletes for more than 50 years, from past legends to today’s superstars, such as Dwight Howard, Candace Parker, Derrick Rose, Tim Duncan and Chauncey Billups. On April 11, 2006 adidas and the National Basketball Association signed an 11-year global merchandising partnership making the adidas brand the official uniform and apparel provider for the NBA, the Women’s National Basketball Association (WNBA) and the NBA Development League (D-League) beginning with the 2006-07 NBA season.