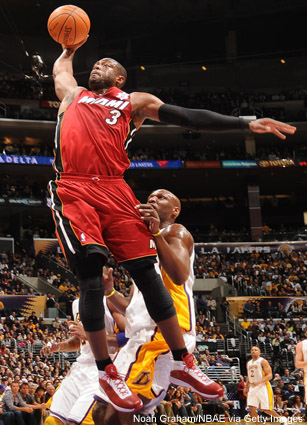 Six years removed from playing competitive hoops, I don’t consider myself a ball player anymore. My handle’s too rusty. My jumper’s broke. My speed’s dissipated and damn-near disappeared. But this morning, playing on Madison Square Garden’s hallowed hardwood, with renowned trainer (and SLAM columnist) Idan Ravin leading myself and a small group of journalists in drills, with the not-yet-for-sale Air Jordan 2011’s ensconced on my feet, it was hard not to feel like a baller.

Let’s take it from the top.

As SLAM Editor-in-Chief Ben Osborne mentioned in his thorough Official Jordan 2011 Unveiling post yesterday, he was scheduled to wear test the new J’s today at the Garden. Many, many inches of snow later, I received an early morning text—picture Christmas morning, minus the tree—asking if I’d be able to go to MSG and take part in the Jordan Brand event in his stead. I couldn’t text back “yes” quick enough.

A little over an hour later, sleep still in my eyes but excitement on my face, I checked into a locker room not 10 feet from the NBA visitor’s locker room. There, waiting for me, were black and red shorts, a black and red Jumpman T-shirt and…an opened box containing a pair of white and black-anthracite Air Jordan 2011’s.

With a few minutes to spare before hitting the court, I picked each sneaker up individually, first right, then left. Handling it like a fragile newborn, I ran my chapped hands over the $170 kick, searching for its perfections and imperfections. The first thing I noticed was its weight. Despite a somewhat bulky appearance—at least compared to all the lowtops players are running around in—the 2011 felt light; it felt playable. The next thing I picked up on was the fabric and detailed design. It’s one thing to read about handcrafted Patina leather and an elephant print outsole. It’s another to actually caress it and feel the handcrafted material under your fingers. Suffice to say, the seemingly simple looking shoe is anything but.

Sensory overload in full effect and gleaming Air Jordans (available on February 19th) now on my feet, I made my way down the carpeted hallway—the same one I patrol when covering the Knicks—to the biggest stage in New York City: Madison Square Garden’s court.

Over the past few years, I’ve spent a lot of time at the Knicks’ homecourt. I’ve been spent time in the locker rooms, press box and even courtside. In all that time, though, I’ve never had the chance to walk around on the 94×50 splendid splinters that are illuminated by the brightest lights this side of the Staples Center. Given that chance today—let alone in Jordans!—I tried to commit every single minute, every single movement, to memory.

Let’s take the on-court movement from the top.

Oblivious to everyone around me, I meaningfully meandered around the court for a few, grabbing the net and slapping the backboard to see if it felt any different than my gym back home (they didn’t). Then, I noticed Idan Ravin sitting courtside.

A guru of sorts who trains a lot Jordan (Carmelo Anthony and Chris Paul, to name a few) and non-Jordan athletes, Ravin was there to put us through a workout and see how the Jordan 2011’s held up. And that’s exactly what he—and they—did.

After putting us through an abbreviated warm up, we got down to it. But, first, Idan made sure we were all wearing the Carolina-blue QUICK insole. For those of you who’ve slept through the past month or aren’t sneakerheads, the Air Jordan 2011 is ushering in an insole revolution, offering two easily interchangeable insoles, with one geared towards quickness and the other towards explosiveness. Back to MSG, the QUICK insole and the workout, Ravin asked us to, one at a time, perform a drill that included a mix of running, backpedaling and lateral defensive shuffling. We each took a few turns doing as he asked. The point was to test the feel and impact of the QUICK insole. And, forefoot and heel Zoom Air Units hard at work, the insole passed the exam with flying colors. Having rocked at least 15 different pairs of kicks on the court in the past year, and I don’t say this lightly, with the blue insole in, the Jordan 2011 was most definitely in my top one or two most comfortable and responsive shoes.

What I was nervous about was switching insoles from QUICK to EXPLOSIVE: Would it be easy? Would it be confusing? Would it be a viable thing to do during halftime of a game? These questions were all answered a moment after the first drill ended when Ravin asked us to do just that.

Without instruction, a visual aid or any assistance of any kind, I was able to properly and effortlessly switch insoles in less than 90 seconds—and I was one of the slower people—just in time to line up for the next task.

While I didn’t perform too well that drill—blame the lack of sleep, NBA rims, or just my crooked J—a one dribble, power-step shooting drill, the kicks did. It’s hard to explain, but I really did feel more explosive on my jump, almost as if the EXPLOSIVE insole was helping propel me forward and up.

We ended the hour-long workout session by playing 3-on-3. Again, I did only alright—hell, you’d be a little nervous to playing at the Garden—but the kicks performed great.  To boil it down to basics, the J’s were both supportive and responsive, the two things I look for in any good sneaker.

At some point during our spirited game of 3’s, the Miami Heat quietly took seats around the court, killing time watching us, waiting for their practice to begin. The entire experience was surreal, but having some of the greatest players watching us run pick-and-rolls was almost indescribable.

One of the onlookers, Dwyane Wade, is a Jordan Brand signature athlete. While he wore the 2010’s last season, this is the first Jordan shoe he’s had design input on. Yesterday, when speaking with Tom Luedeck, the 2011’s designer, SLAM asked about just how much input Wade had on Jordan’s latest signature kick.

Back on the court, with my defender playing well off of me, I took one hard dribble and rose high (well, for me at least) for the jumper. Swish. The next play, with my defender sticking too close to me, I threw him an upfake and took two dribbles to the hoop. Kiss, Swish.

I’m no DWade, but for a few minutes, thanks to JB, I was able to feel like him.

Hours after playing at Madison Square Garden I can honestly say that playing ball there is everything it’s hyped up to be—as are the Air Jordan 2011’s.