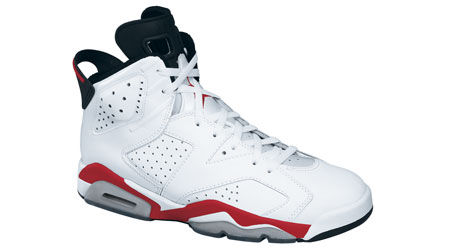 The Air Jordan VI was to the V what the IV was to the III—the return of the same basic silhouette with a bunch of added-on plastic and rubber. The strip of leather across the toe disappeared—not to return until the X—and the 3M tongue sadly disappeared. The VI may have the distinction of being the easiest Air Jordan to put on, thanks to its rubber loop on the heel and complementary finger holes in the tongue. The clear outsole rubber remained, just with more of a zig-zag pattern, and circular holes for traction rather than the V’s traditional herringbone.
But once again, what happened in the VIs was more important than the shoes themselves. The Bulls finally toppled the Pistons—sweeping them in the Conference Finals and finishing them off with a 20-point win in Detroit. They went on to beat the Lakers in a somewhat anti-climactic Finals, and the legend grew.