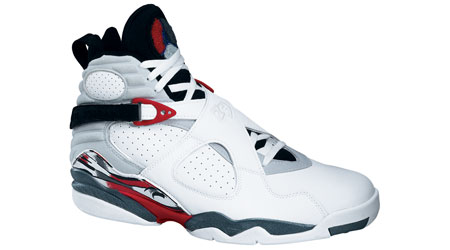 If the Air Jordan VII represented a shift toward minimalism, the VIII came all the way back in the opposite direction. Laces covered by crisscrossing Velcro straps, tongue adorned with what looked like a latch-hook Jumpman patch, the Jordan VIII was the sneaker equivalent of a ’59 Cadillac. If the intent of the VII was to demonstrate that less is more, this seemed to imply that no, more was more. And the more “more” there was, the better. The commercials once again went the Warner Brothers route, this time featuring Marvin the Martian and his cohorts. A preview of Space Jam to come.
The shoe itself was a bit heavy, a bit prone to overheating. But it didn’t seem to bother Jordan himself much. He won yet another NBA championship—his third—and yet another NBA scoring title. Business as usual.
Or so we all thought.