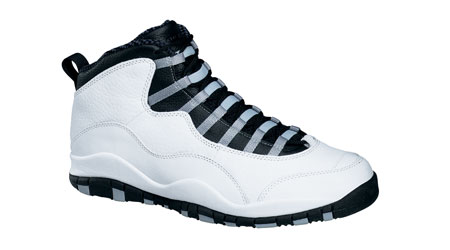 Looking at the Air Jordan X now, knowing what we do, it seems like someone at Nike thought Michael wouldn’t be coming back after all. Start at the sole, which features a virtual banner of his achievements, beginning at the heel with “85 Rookie Of The Year,” and ending at the toe with “94 Beyond.” There were no spaces left blank.
Also consider that the Air Jordan X was the first Jordan to be released in the colors of NBA teams other than the Bulls. There was a Chicago colorway, of course, but also Orlando, Seattle, New York and Sacramento. These were worn, respectively, by Nick Anderson, Kendall Gill, Hubert Davis and Mitch Richmond. Harold Miner of the Miami Heat—also known as “Baby Jordan”—wore the Chicago colorway, as did Scottie Pippen.
But then Michael did come back, of course, on March 18, 1995, wearing the Xs for the final 17 games of the ’94-95 regular season. Welcome back.