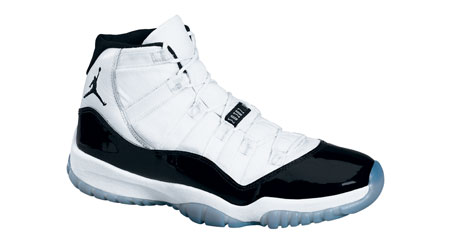 If the Air Jordan line as a whole represents “sports luxury,” the Air Jordan XI is the individual shoe that represents that ideal best. And to think, it almost never existed at all. According to designer Tinker Hatfield, Nike tried to dissuade him from designing the shoe at all, expecting Jordan to stay retired. Even Jordan himself thought he was done. But Tinker kept going, because he had his own ideas: “I really wanted this shoe to be the greatest basketball shoe ever because it was really gonna be this triumphant return sort of thing.”
Correct on both counts. The Jordan XI was a stripped-down speed machine, radically different from everything that had come before. But Jordan’s fame and Hatfield’s track record were enough to get anything through. It used futuristic materials—a carbon fiber spring plate, ballistic mesh upper, clear outsoles, Zoom Air cushioning, and most notably, shiny patent leather. This was the masterstroke—not only did it provide a distinctive dress-shoe look, but it’s virtually stretch-proof, making the shoe stronger without adding weight. As for the triumphant return: Anyone else win 70 games?