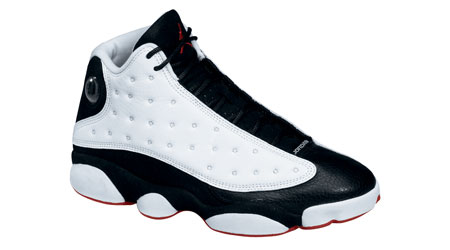 The greatest contribution Tinker Hatfield ever made to shoe design was this: the idea that a signature shoe should reflect some of the athlete’s personality, and not just be a product that bears his or her name. The Air Jordan XIII is probably the best example of this.
The design started with a nickname, “Black Cat.” That led to the prismatic “eyes” on the outer ankle and soles, and the “face” that appears when you put the outsoles next to each other. The dimples on the upper reflect Jordan’s love for the game of golf. And when viewed from the back at a proper angle, the uppers form a subtle “23.” The performance, as usual, was top-notch, once again using Zoom Air and a spring plate. Different colorways used different upper materials, from full-grain leather, to suede, to reflective mesh. It was also the first Air Jordan released by the Jordan Brand, which had split off from Nike.
Once again, though: different shoe, same result. Another championship, finishing off the repeat threepeat, once again against the Utah Jazz. He ended it, as proper, with the last shot to end all last shots. (But what were those on his feet?)