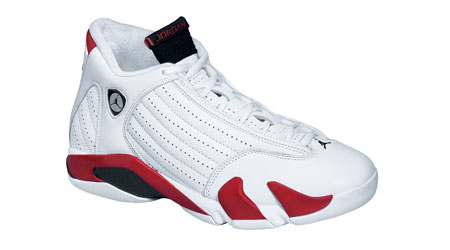 The shoes Michael Jordan was wearing when he took his last shot in the NBA—um, OK, his last shot as a Bull—were the Air Jordan XIVs. Normally they would have never been unveiled that early, but Jordan knew he would be retiring this time, and he (and Nike) thought it would be a good idea to get the next shoe out there. Especially on his feet.
You can’t fault the logic, because it worked out better than anyone could have possibly hoped, but even if MJ had never worn the XIVs in an NBA game, it would still be an all-time classic sneaker. Modeled after Jordan’s Ferrari 550 Maranello, the XIV was a sleek roadster of a shoe (the lowest “mid” yet) with swoopy lines, silvery mesh-backed air vents and a Ferrari-like Jumpman “shield.”
Since Michael Jordan wasn’t on NBA floors for the lockout-shortened 1999 season, it was up to others to carry the on-court legacy. Ray Allen and Reggie Miller, among others.