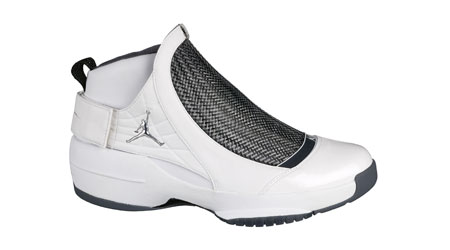 After hiding the laces on the previous three Air Jordan models, the intent when designing the Air Jordan XIX was to eliminate them completely. The designers who populate the top-secret Nike Innovations Kitchen (Tinker Hatfield and Eric Avar among them) tried new materials in new ways, did everything they could with the available technology—but, in the end, laces won out. They may be archaic, but they still work the best.
What was intended to be the laces’ replacement became a mere cover—a new form of lightweight plastic mesh (at least in sneaker design) that expanded and compressed, but didn’t stretch. A Velcro strap held the cover in place. Instead of regular shoelaces, the XIX used extremely thin laces together with plastic lacelocks. So at least there was no need to tie them. The usual performance enhancers remained—Zoom Air, a carbon composite springplate. True lacelessness, however, would have to wait.