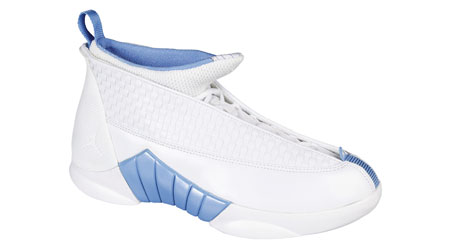 I’m not entirely sure of the dates, but the Air Jordan XV may very well have been the first Air Jordan to be entirely designed with the knowledge that Michael Jordan was retired from the NBA, never to return again. (Well, to the best of anyone’s knowledge.) It was also the final Air Jordan to be designed by Tinker Hatfield. (Well, to the best of anyone’s knowledge.)
Whatever the case, it sure was different. Taking cues from the supersonic X-15 fighter plane (the Kevlar mesh upper and the first all-black stealth colorway) as well as Prada Sport shoes (the black upper and the red stripe up the back of the heel), the Jordan XV managed to be subtle and distinctive at the same time. It was cut higher than the XIV (and a bit clunkier) and the tongue (which wasn’t even a separate part) stuck out in a peak up front—not unlike MJ’s own tongue.
Jordan himself never wore the XV in an NBA game. Instead it was up to guys like Ray Allen, Derek Anderson and Reggie Miller to carry the standard as best they could.