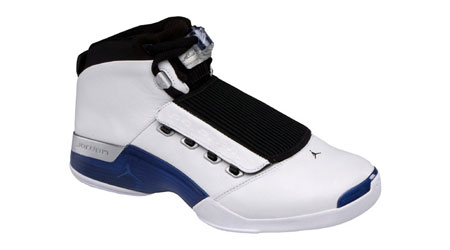 Every year, the design of the new Air Jordan is a closely guarded secret. At least it’s supposed to be. Of course it always winds up leaking onto the internet before it’s ready (and I’m sure many of you saw the XX2 months ago), but that’s not the point. The packaging for the Air Jordan XVII seemed to play off of this.
The temptation here is to go into a Jim Mora/Allen Iverson rant. “The box? We’re talking about the box? The greatest basketball shoe in the world and…the box?” But this was a box like no other sneaker box that came before it: A faux-aluminum briefcase containing the shoes as well as a CD-ROM explaining some of the design details. Given the price tag—an unprecedented $200—perhaps it should have come with a handcuff to attach it to the buyer’s wrist.
The shoe itself was a bit underwhelming, given the elaborate presentation. A semi-visible airbag, multiple lacing patterns, and a set of superfluous click-on lace covers that were more often than not left off. Then again, Michael himself returned to play in them, so who are we to judge?