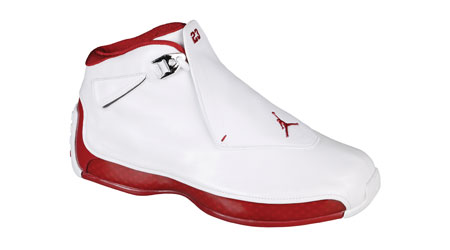 It’s no secret that Michael Jordan is into cars. Always has been, since his days endorsing Chevrolets as a young Bull. So it’s no surprise that his shoes would reflect that love—you’ll remember the XIV, designed after his new Ferrari. Still, this was different.
While the XIV was based on a specific car, the XVIII drew cues from the art of driving. Start with the sole, which resembled the sole of an Italian driving shoe, with the rubber of the heel extending up the back of the shoe. The first version, in all black suede with royal blue accents (befitting his new team, the Washington Wizards), delivered the workings of a high-tech basketball shoe in the guise of a super-soft moccasin. The only cues to what lie beneath were two silvery air vents, themselves masked by suede flaps. The laces, once again, were completely covered, although this time the shroud was non-removable. “Stealth” may not have been the game plan, but that was the effect.