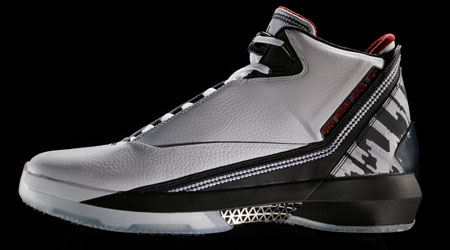 When ideas first started being kicked around for the design of the Air Jordan XX2, there was concern that would-be consumers would be looking right past it at the numerically significant XX3. Little did they know that the number XX2 would be just as important.
Seeking inspiration, footwear designer D’Wayne Edwards found it in the F22 Raptor, Lockheed-Martin’s state-of-the-art stealth fighter. The thought was that Jordan himself exhibited stealth characteristics when he was playing—and he must have agreed, because he even started referring to himself as “Stealth” during the design process.
The completed shoe, which drops this coming Saturday—All-Star Saturday and MJ’s 44th birthday—certainly has a lot of ties to the fighter jet that inspired it. Sleek and smooth, it says “state-of-the-art attack” from its 3M camo heel to its skeletal titanium-plated shank plate and all points between. The tradition of Air Jordan is alive and well.