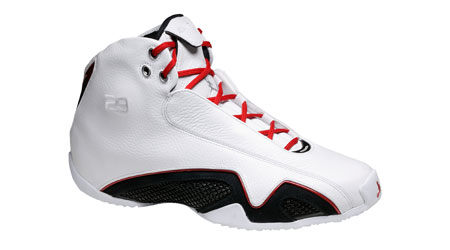 As stated earlier, Michael Jordan is into cars. And he likes to travel fast. On four wheels—and on two. He’d dabbled in motorcycles before his retirement, but after he left the game for good they became his primary passion. Jordan sponsored a motorcycle racing team and did more than just put up money. You probably had a better chance of seeing him at a motorcycle race than you did seeing him at an NBA game.
The Air Jordan XXI, while still performing at the highest level on the basketball court, reflected that love. Higher-cut than any recent Air Jordan, the XXI finally did away with lace covers, Velcro closures and all other extras (although, admittedly, the Air Jordan XXI SE did have a lace cover). What it resembled most was a racing boot—especially in its limited-edition red suede colorway—with an exposed carbon fiber shank plate and a mix of other high-end materials. All business.