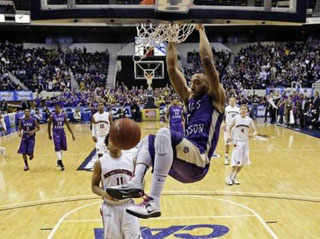 When the final buzzer sounded, the confetti fell and thousands of James Madison University students stormed the Richmond Coliseum floor on Monday night, AJ Davis was in the middle of it all. The fifth-year senior scored 26 points to lead the Dukes to their first Colonial Athletic Association Tournament Championship since 1994, to cap what was a sensational weekend for Davis in Richmond, VA.

In JMU’s three tournament victories, Davis scored a combined 62 points on 61.8 percent shooting. But, while compiling those numbers is an incredible feat, the fact that Davis was even on the court for the Dukes was a far greater accomplishment for the 25-year-old.

That’s right. Davis took an incredibly long journey until he finally arrived at JMU. After being rated the No. 8 overall prospect in Ohio during his senior year at Linden McKinley High School in 2007, Davis spent one year playing prep ball at Harmony Community School of Cincinnati while he improved his grades before he could join a Division I program and institution.

Once he did so, Davis accepted a scholarship to the University of Wyoming, where he improved in each of his first two seasons. But it was not the right fit.

“I kind of had some family issues, so I had to come back home,” Davis recalled. “My cousin was here, Devon Moore, so I did some digging around while thinking, Where should I go? So finally, Devon told me to come down here with him. We wanted to play together since high school, so it was a great fit.”

Moore, the senior starting point guard for the Dukes this season is not in fact Davis’ biological cousin, but the two did grow up together in Columbus, OH. The duo of dynamic JMU perimeter players were both expected to be key contributors to the Dukes’ success this season, as Davis was selected to the Pre-season All-CAA Second-Team.

But the going got rough for James Madison at the beginning of the year, as the Dukes started their non-conference slate just 1-5. For Davis, specifically, tensions mounted between him and head coach Matt Brady about his commitment to the team. At the peak of the dilemma, Brady benched Davis after the team’s collapse in overtime against Duquesne on November 19. Then, after playing just four minutes against George Washington on November 28, Davis was suspended by the team for JMU’s December 1 clash with Winthrop. The senior was forced to watch his teammates go on to beat the Eagles by 10 points without him.

Frankly, Davis seemed like an unnecessary cog in the Dukes’ machine.

“It was rough,” Davis said. “It was a rough start to the season and I wasn’t really producing the way they, and I, thought I could produce.”

The JMU coaching staff knew that Davis, who Brady had previously labeled a selfish player, was an offensive talent, but needed their 6-6, 210-pound wing to commit to the defensive end. As a team, the Dukes were the best in the CAA this season in defense, holding opponents to 60.8 points per game. But, Davis was never truly an intricate part of that defensive execution.

“AJ’s minutes are determined by how much he buys in defensively,” Brady said during a CAA coaches teleconference earlier in the season.

Those minutes started to spike when Davis led JMU to an impressive victory over Towson on February 12. He logged 30 minutes off the pine to score 17 points on 7-13 shooting.

From that game on, Davis played 30-plus minutes in all but one of the Duke’s remaining seven contests, including the CAA Tournament. During those seven games, Davis averaged 22.4 points, 5.4 rebounds and 2.8 steals per game while shooting a ridiculous 60.0 percent from the field and 41.3 percent from three-point land.

“I really bit the bullet and sacrificed for the team and not for me,” Davis said. “It was about sacrificing to get to the CAA championship and getting a ring.”

Brady calls Davis’ turnaround on the court a true product of his personal, moral and mental maturation off of it.

“What this guy, AJ, has done is one of the most unbelievable stories I’ve ever been apart of,” Brady said following the team’s championship victory. “What he decided to do for our program, if I coach for 40 more years, I don’t think I’m ever going to see it. What he did with his decision to be a part of something bigger than himself is the most unique thing I’ve seen in all my years coaching and playing.”

Davis doesn’t attribute a single event or game as the turning point that impacted his mindset, but he is not short for words when describing his new viewpoint on the game.

“I’m going all in on the defensive end,” Davis said. “If I play good defense and get the rebound we’re off to the races, man. Teams are starting to double on me so I’ve kicked it out to some of our other guards, dropped it in to Rayshawn [Goins] in the middle. It’s a blessing that I can impact both ends of the court and help my teammates succeed.

Davis ultimately helped his teammates succeed with his eye-popping athleticism and highlight-reel play down in Richmond. He captivated the Coliseum crowd from the first five minutes of JMU’s opening round matchup with William & Mary. He made the crowd erupt following several jaw-dropping alley-oops and dunks. Whenever he even got a single inch off the ground, everyone in attendance held his or her breath.

It was no surprise that Davis earned the tournament’s Most Outstanding Player honor for his spectacular play. His weekend-long performance even led the Coliseum public address announcer to say his name for starting lineups and following made basketballs with a little extra “umph” and pizazz.

Now with a trip to the NCAA Tournament in his, and his team’s, imminent future, Davis is hoping that more than just 6,000 people will know and eagerly chant his name. He’s more than ready for the national stage and appreciative for the opportunity.

“It’s just a blessing,” Davis said “Whatever opportunity comes, whether that be the NBA or overseas, I’ll be more than willing to take it.”