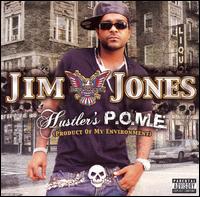 With Jay-Z’s album officially in stores today, and the Hewlett Packard/Budweiser pitchman and “CEO of Hip Hop” receiving all the hype he needs, I’m going the other way.

Freeky Zeeky finally got out of jail, and last night the Giants officially stopped Balllllliiiinnnnggggg, so now is as good a time as ever for my commentary on the Jim Jones album, Hustler’s P.O.M.E. That stands for “Product of my environment.” Of course it does. I’m calling this an album commentary, not a review. I’m not judging this as Hip-Hop or a rap album. It just is what it is.

First, I have to ask some questions of myself. Why do I listen to Dip Set? Why do I rep it so hard? Why do I not mind it when people call me Samron or Killa Sam? Why did I tell someone yesterday that when I get married, me and my wife will be introduced to the song “Honey DIP” by Jim, Juelz, and JR Writer? Why have I said things like “I bought that book at no homo Barnes and Noble?” Why do I take so much pleasure in rap music with lines like “I’ll take a hundred thou but it’s usually millions/I kidnap adults but it’s usually children?” I don’t live a Dip Set lifestyle. I do not spend a penny unless it’s absolutely life or death, such as on meals, or maybe for a video game I don’t get for free. I drive a Toyota Corolla that not only doesn’t have rims, it’s missing two plastic hubcaps, one of which I once replaced with a hubcap I bought from a homeless guy who had been collecting them on the side of the road. I can read and write, and I’ve been known to be able to understand the big words found in the New York Times and Malcolm Gladwell books. Pharohe Monche is my favorite rapper of all-time and I once considered him a sell out for doing albums without Prince Po. I see Common Sense doing Gap ads and my first reaction is that I’m happy that he’s getting money. I am fully aware that Dip Set caters to the lowest common denominator, and that at times they set society back anywhere from 40 to 200 years. Well, what can I say? I listen to Dip Set. Now git down Now git down Now git down Now git down Now git down Now git down with the SET SET SET!!!

To really understand Dipset music, you can’t be sober. I’m not trying to condone any deabaucherous behavior, but it’s true. Once you get there it’s worth it. This is not music to be intellecutally dissected. Just let it bump. I’m not going to write a fancy review preaching the value of the postmodern nihilistic decadence of their music. I’m not goging to babble on about the melodic usage of harmonies and appreggios and all that stuff or whatever’s going on in the beats. It’s just something to listen to that I enjoy. Look at Jay-Z for comparison. A man with limitless talent. He’s not only a great artist but he’s also brilliant at marketing himself. Look at his new video. It’s like he sat down and thought, what is popular with an audience that I may have not reached yet? Hmmmmm… Wait I know. NASCAR! Hello Dale Earnhardt Jr. and Danica Patrick. A strategically genius corporate move. That’s boring to me in its calculated execution.

Jim Jones is stupid and reckless and that’s what makes this album so good. Truthfully, I don’t really much care for anything past the first 6 songs or so, but those first 6 songs including the intro are all you need. If this was a cassette tape, it would be amazing. But we’re the ipod generation. We don’t have the attention span required to stay interested in one long album.

Now, you might think that Jim can’t rap and he just yells BAAAAALLLLIIIINNNNNGGGGG all the time. Not true. At least the balllling part. He also yells out “SCCCCAAAARRRRYYYYYY!!!” after saying “The nightmares of a trapstar” and he yells out “STOOOPID!!!” after my favorite rap line of the year “Y’all swear you’re ballin but you foolish/ Gettin locked up for crimes and your lawyers ain’t jewish.” Yes Jim. Preach. The most amusing moment of the album is when he brings back the classic Freddy Kreuger poem (or p.o.m.e.) with his own Jim words “One, two. Feds coming for you. Three, four. Better watch the law…”

Juelz Santana shows up and delivers the line “4 door Bentley. Looking like steroids.” That makes no sense on any level of dialect. I have no idea what that means. That is not the king’s English. Hot. And really I shouldn’t even be quoting the album cause that just means I’m listening too closely. Just quoting these words make me a swagger jacker. But in fairness, Jimmy swagger jacks my friend White Rob back, when he yells out “CRISP!!!” about shoes. Come on Jones, you know that’s Robbie’s word. You know he had his Yankee fan heart broken when the Red Sox signed Coco Crisp.

There’s a song about girls with the chorus “Pin the tail on the donkey.” Cam’Ron shows up on that track, and I’ll admit, it’s a mailed in performance if I’ve ever heard one. He’s like Shaq in the regular season. He just wants to get paid and doesn’t really care how it sounds. Come back to us Killa.

The song “Bright Lights, Big City” uses a beat that’s such a ripoff of Jay-Z’s classic “Where I’m From” that it has to be a not so subliminal nor effective diss. The Jay classic is much better. Damn that song is a classic. Uh oh, focus. Actually the album is littered with stolen lines from every rapper that Jim Jones claims to have beef with. If he were an actual artist, I would call him out on that, but he’s just a guy that’s not very talented who is rapping. I forgive him for his sins. I mean, look at this old clip of the Cam classic “Let Me Know.” Look at Jim at the beginning of the video. He was just a famous rappers friend or weed carrier or lieutenant or muscle, etc. And now he’s entertaining the masses.

Anyways, Bright Lights is hot, and Max B does the hook. Max B does the best damn rap chorsues in the universe. You can have your fancy R&B song choruses with this and that female singer. The only female on this album not including some voicemail skits (ripping off Biggie, I know) is Jha Jha, the best female rapper since Fergie Stefani.

After the first six shots, the album just kind of blends into the background. Some songs for the ladies, something with Hell Rell a.k.a. one of the five rappers that’s actually tough in real life (along with Pistol Pete from Terror Squad and 3 others), and some other stuff that I probably won’t listen to again.

The best song on the album is “We Fly High” which you have heard 10,000 times by now, and if you were near my car on the way to the Giants-Bears game a few Sundays ago, then you would have heard it 10,012 times. So addictive. Too bad the Giants aren’t balling like that anymore and I get depressed thinking about it.

In conclusion, I received this album for free and it is getting heavy rotation in my lowly Toyota Corolla with 2 hub caps, which I purchased because of the 30 miles per gallon it gets. On one of his classic DVD performances, Jim Jones clowns Loon cause Loon was spotted driving a Maxima. Compared to a Corolla, a Maxima is like a Ferrari F-50. Jones would clown me too if he knew about my lowly vehicle or about how little I truly ballllllll. I respect that about him. We white people have a weird tendency to enjoy music that makes us out to be devils or just not cool in general. For example, the massive commercial success of Public Enemy and N.W.A. with no radio play. It’s really the strangest social phenomenon of all-time. On that note, if you get your hands on Hustler’s P.O.M.E., enjoy it for what it is.

One final note: if you think Jim Jones is the least talented person in rap music, then I’ll tell you who is the most talented. Aries Spears. Yeah, the professional comedian from MAD TV. This is one of the most amazing performances you will ever see in your lifetime.