Alex Len Worked Out With Tim Duncan This Summer 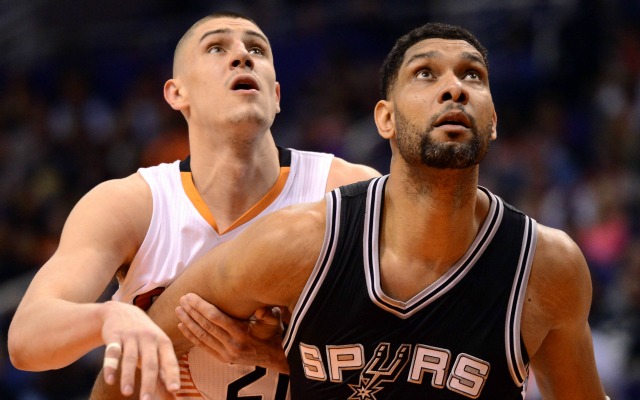 If you’re a young big man in the NBA, there aren’t many guys that would be better to get guidance from than Tim Duncan. The legendary Spurs veteran welcomed Suns center Alex Len to San Antonio for three days this summer to work with him and learn some tricks of the trade. The 22-year-old averaged 6.3 ppg, 6.5 rpg and 1.5 bpg in his second NBA season last year. Details on the Duncan workouts, from AZCentral.com:

Just five years ago, Alex Len was staying up or waking up at 3 a.m. in Ukraine to watch his idol, Tim Duncan, play a sport that Len had picked up only four years prior.

Two years ago, Len progressed to being a No. 5 draft pick and entered a preseason game in awe of being matched up against Duncan.

This summer, the idol became a mentor. Len visited San Antonio for three days in August to work with Duncan, a 19th-year Spurs star — from the dark side for Suns fans — helping the bright future of the Suns’ 22-year-old center.

“He was super-cool about it,” Len said. “He was one of the nice players I’ve ever met in my life. He is one of the most humble superstars you’ll ever meet. He’s like Tyson (Chandler). He’s always happy to answer any question. He genuinely wants to help you.”

The chance to work on nuances with “The Big Fundamental” was set up by Suns senior adviser Lon Babby, who served as Duncan’s agent before becoming a Suns president in 2010. Len met Duncan, a 16-time All-Star, each day to work out and then join Spurs pickup games — an option for any NBA player when visiting an opponent town in the offseason.

“He helped me a lot too with my patience, catching the ball, where you look, what action, what guys you’re looking for in cuts, reading defense,” Len said.