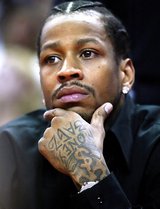 Longtime Philadelphia columnist Stephen A. Smith of the Inquirer dropped something of a bombshell this weekend, essentially claiming that (according to his sources), Allen Iverson is more or less an alcoholic, with gambling issues to boot.

Given A.I.’s well-chronicled love of the nightlife (and casinos in particular), this was not exactly a shocking revelation.

With everything that’s been happening in his life of late — the loss of his job as an NBA player, the divorce filed by his wife, and the illness of his daughter — Iverson felt compelled to issue some kind of statement.

He did late last night, via the Twitter machine:

To my fans: You all know that my life isn’t perfect. I am going through some very tough times right now, like I am sure that we all do from time to time. However, I will stand tall like always with “rhino” thick skin.

Even though I have become used to hearing people say things about me that aren’t true, it still hurts. I encourage you to continue your ongoing support and I want you to trust that this is another obstacle in my life that, with God’s help I will overcome. God Bless You All.

Hours after the tweets were posted, I read a couple of misguided pieces on the web, in which the authors complained that Iverson chose to respond via Twitter, as though he somehow owes the world a larger explanation for what he’s currently going through.

Allen Iverson’s problems — whether they’re as serious as the media claims, or whether some things that have been written and said about him are untrue as he claims — are his, and his alone. What he chooses to share with the outside world isn’t really for us to critique.

One can only hope he eventually pulls through.