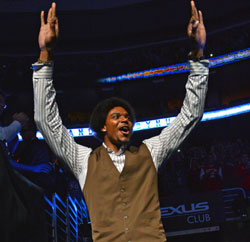 Andrew Bynum will don a 76ers uniform at some point, but unfortunately, his debut won’t be any time soon.

Bynum admitted to ESPN that he recently suffered a “setback” and had “weakened cartilage” in both of his knees. The Sixers fear that the damage occurred when their center went bowling recently:

The Philadelphia 76ers fear All-Star center Andrew Bynum might have done additional damage to his knees while bowling, according to sources close to the situation.

Multiple sources told ESPN on Saturday that Bynum suffered an unspecified injury this month while bowling. On Friday, Bynum revealed that — on top of the issues with his right knee that could keep him sidelined until January — he also had suffered a “setback” with his left knee.

“I had a little bit of a setback, and we’re just working through some issues with the right knee,” Bynum said before the Sixers beat the Utah Jazz on Friday night. “I kind of have a mirror thing going on with my left knee. I don’t know what’s going on, but the doctors are saying pretty much that it’s a weakened cartilage state.”