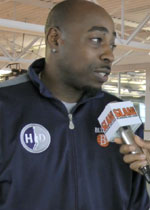 “There is a section in Chicago where gangs completely rule everything. Kids are getting shot on their way to school. Even for the kids who place school as a priority, they don’t feel safe to go outside. It’s like they need a police escort just to get to class,”—Hoop Dreams star Arthur Agee, 2010 interview.

Although the statement was made just under four years ago, the problems within the city have sadly remained unchanged.

But recently, the Arthur Agee Jr Role Model Foundation teamed up with Books over Ball at the second annual Rotary Partners for Peace Summit at the Salvation Army Ray and Joan Kroc Corps Community Center on the south side of Chicago with the hope of creating strategies and solutions to aid in ending neighborhood violence while empowering the youth to use their athletic capabilities to further their education with scholarships to various universities around the country.

The “breakout session” featured Agee recounting his struggles as a teen growing up on the west side of the city in a home with a mother desperately trying to raise five kids on welfare at $235 a month and a father who battled with a drug addiction that kept him in-and-out of his impressionable son’s life. But despite the unruly yet common circumstances, Agee went on to complete his college education and remains a constant presence in the neighborhood he refused to succumb to, spreading a message of hope and the tangible reality that you are who you want to be.

His efforts to promote positive change are critical to the young men and women who were born into deep despair and bleakness of their unforgiving neighborhoods, as he was just 41 years ago.

The partnership between the Arthur Agee Jr Role Model Foundation and Books over Ball has been in existence for just shy of five months, but the profound message has impacted hundreds of kids throughout the city. His message has even gone on to rest in the heart of one of the greatest leaders this country has ever seen, President Bill Clinton.

“He’s a remarkable young man, you know… And I hope that Hoop Dreams and Arthur Agee both serve as a kind of an inspiration to kids all across this country who are growing up in very hard circumstances. They can make it. They can be something.

And as we approach the 20-year anniversary of the documentary that shed light on the harsh conditions of growing up in the “hoods” of America, his work thus far is only the tip of the iceberg.