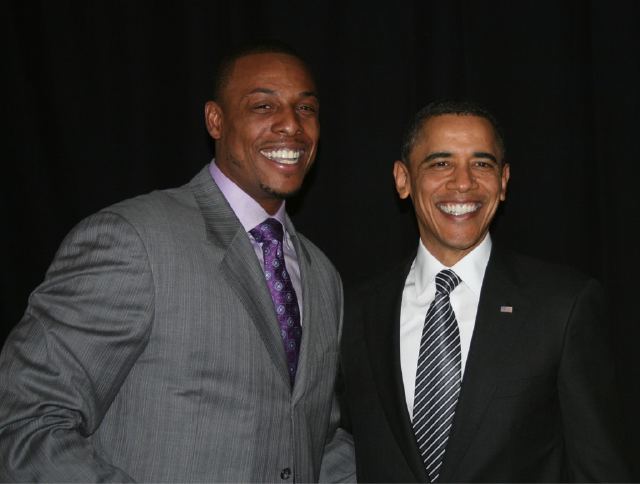 Five Washington Wizards players were Monday morning guests at the White House, and shot hoops with the leader of the free world during the Easter Egg Roll on the South Lawn.

Barack Obama hit a game-winning bucket and playfully let Paul Pierce know all about it afterwards.

Obama and the five Wizards – John Wall, Bradley Beal, Paul Pierce, Kevin Seraphin and Garrett Temple — participated in a shooting game on the White House basketball court with a group of children. Wall came away impressed with the Chicago southpaw. […] “It was fun. [Obama’s] got the weirdest jump shot release but today he showed off,” the all-star point guard said. “He showed off today. He hit two game-winners so he showed off a little bit today.”

The five players were separated to captain five teams of children. But Wall was the only player shooting — his teammates were only retrieving rebounds and helping the children on their squad shot. Obama then joined Wall’s team and they won two straight games before the other Wizards began shooting. But Obama and Wall won the last game to finish with three straight victories anyway and Obama added some boasted after his late-game heroics. […] “He trash-talked Paul when he hit the game-winner,” Wall said. “He was like, ‘I’m clutch, I’m clutch.’”

Pierce is considered one of best trash-talkers in NBA history but all he could do Monday morning was dap the President. Later on, Pierce didn’t participate in Wizards practice. The team said he was under the weather.