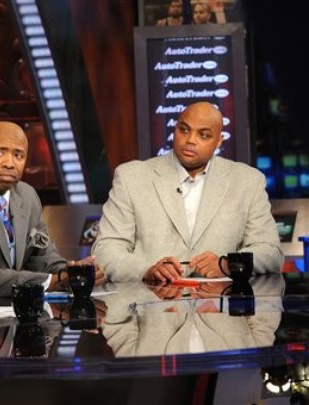 Just back from the annual NBA on TNT Media Luncheon at the Time Warner center, where me and about 15 other folks that cover the L got treated to a nice lunch and some great remarks from some of TNT’s key on-air personalities: (listed as they were seated, from left to right) Kenny Smith, Charles Barkley, Marv Albert, Steve Kerr and Mike Fratello. Marv served as an MC of sorts, but for the most part it was an open forum for the journalists to throw out questions to the guys (as well as the always classy TBS Sports President, David Levy) and let them answer off the cuff.

Besides catching up with some of the other media types there, I participated by asking Levy if TNT was approached about airing “The Decision” (“No,” he said. “And we wouldn’t have been interested in something where we had to give up control like that.”), all of the guys if Erik Spoelstra was up to the challenge of leading the star-powered Heat (Kenny said definitely, but Charles thinks there’s a real question as to whether Spo’ will fell comfortable yelling at LeBron/Wade, etc.) and taking lots of notes in the hopes of getting a great soundbite.

Sure enough, Sir Charles delivered. Somewhat unprompted, as the lunch and conversation were winding down, he announced that in his opinion, “the Heat have to win two, probably three, championships, in the next five years to be a success. We have never had a situation like that in the NBA.”

For more from our friends at NBA on TNT, including upcoming game schedules, video clips and cool links, visit their Facebook page at www.facebook.com/NBAONTNT.