Hard by the Mexican border in the south side of El Paso, TX, the annual Basketball in the Barrio Camp spends three days enriching the lives of local kids with hoops—and much more. 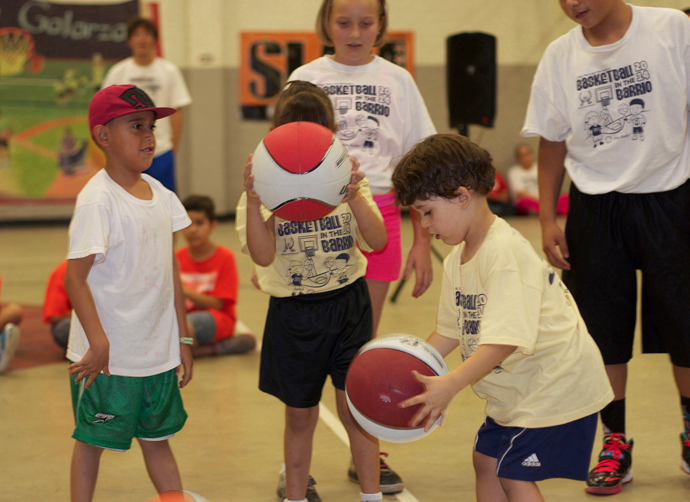 When schools across America get out for the summer, basketball camps are a popular activity. There are weekend camps and week-long camps. Day camps and sleepover camps. Camps held at high schools and camps held at colleges. Most of these camps are expensive, as there is insurance to cover, location costs, staff to pay and a profit that camp organizers like to make (often hefty). There are also the shoe-company sponsored camps that are free, but these are invite-only affairs open to the very best players in this country (and occasionally, the world).

Basketball in the Barrio is like none of the above, or really any camp I’ve ever heard of. Basketball in the Barrio is a rare gem, a three-day event at the Armijo Center in El Paso, TX, that costs attendees—boys and girls, ages 6-10, who hail primarily from the immigrant-heavy Segundo Barrio in which the camp is held—all of $1. And perhaps most uniquely, the camp is not really about basketball.

Through working at SLAM, I’d heard about the camp from the documentary about it (Doug Harris and Athletes United for Peace’s Basketball in the Barrio) and from past guests of the camp like SLAM Fam Bobbito Garcia and Dave Zirin, and most of all from the man who makes the camp happen, Rus Bradburd. A former assistant coach at UTEP and New Mexico State who was renowned for recruiting players out of his native Chicago, Bradburd now teaches English at New Mexico State and spends his summers back in the Chi, writing (once in a while for us here at SLAM; just check your old issues or his online archive for some poignant work).

Bradburd left UTEP in 1991 and stopped coaching altogether in 2000, but he always had a soft spot for the people of El Paso. Having worked at typical for-profit basketball camps at UTEP and elsewhere, about 20 years ago Bradburd teamed up with former UTEP guard Steve Yellen, a New Yorker who’d stayed in El Paso after he graduated and had success working locally for JP Morgan, to offer a camp to the many local kids who couldn’t afford to pay “$200 a week for basketball camp.”

In 1997, after inspirational El Paso athletic hero Joe “Rocky” Galarza died, Bradburd and Yellen teamed up with the non-profit Athletes United for Peace to formally start Basketball in the Barrio and install it at the Armijo Center. The cost was $1, open to the first 100 kids from Segundo Barrio who signed up, and the camp was held in June. Nothing’s really changed since. “This year, $1 gets the kids a book, peace poster, basketball, shirt, lunch and some Price’s Ice Cream,” Bradburd says.

Rus had explained the camp to me many times over the last couple of years, but with his generous invitation, this was the year I could see it for myself.

My daughter and I arrive at the El Paso Parks and Recreation Department’s Armijo Center on Friday morning, June 13, and it’s immediately clear we’re in for a treat. Outside the facility, a bunch of this year’s volunteers who Bradburd knows from Chicago—many of whom play or teach music—are playing traditional Mexican music.

Once inside the Center, a typical community building with basketball court, pool, lunchroom and classrooms, campers and coaches sign in, pick up their t-shirts and head to the table their “team” has been allotted.

I get Team 7, which is comprised of a shy group of boys (and one girl) who aren’t that passionate about basketball but are eager to have an activity- filled day. And they get it. Once introductions have been made and the bulk of campers have arrived, the 12 coaches break off to their stations to start teaching. Anyone who’s been to basketball camp knows about stations. A typical camp might have one for the Mikan Drill, one for defensive slides, one for free throws and so on.

Basketball in the Barrio has a few of those, too (I’m in charge of the “low-dribbling” station, an appropriate assignment from Rus since ballhandling is the only basketball skill I’ve ever been good at), but there’s also a music station, a percussion station and a couple “education stations,” which feature reading, writing, drawing and more.

The morning portion of the camp includes seven minutes at each station, followed by lunch (prepared in the Center’s kitchen by members of the Galarza family) and a long break for activities that have little to do with hoops.

The middle of the day is when the cultural component of the camp really hits home, as the kids are treated to a mini-concert by some members of the El Paso High orchestra and a dance performance by the brilliantly outfitted local troupe, Ballet Folklorico of El Paso. Mid-day entertainment on the subsequent two days will include visits from famous bilingual storyteller Joe Hayes, a magic show and more. There’s also time dedicated to an art project, with each team working together to build a basketball-themed sculpture out of plastic wrap. After long stints of music and art, the afternoon stations run for five minutes each, right up until about 3 p.m., when the kids are given ice cream provided by Price’s (the local creamery is a long-time supporter of the camp) and let out for the day.

As Bobby Byrd, publisher of El Paso-based Cinco Puntos Press, which supports Basketball in the Barrio, says in the movie about the camp, “calling it basketball is a scam; it’s really about culture.”

Byrd is one of many locally connected folks who stop by the camp to lend a hand. The modesty of Rus, Steve and all the volunteers is such that there’s no program or list of bios or anything like that, but people I come in contact with in my time at Basketball in the Barrio include former Texas-Arlington player Chris DeSimone, former UTEP star Johnny “Smooth” Melvin and Los Angeles D-Fenders coach Casey Owens, all of whom share the experience with their own children, who all help coach, too. There are also volunteers from the organizations PeacePlayers International and Full Court Peace. Over the years, many other notable guests have come through to donate their time to the camp, from favorite son Nolan Richardson (before playing at UTEP and embarking on a Hall of Fame coaching career at Arkansas, Richardson grew up as one of the few black kids in this Mexican-dominated neighborhood) to former UTEP center and long-time NBA player Greg Foster.

These are just the basketball-themed names I could fact check; other volunteers come from all walks of life.

What draws such a diverse and relatively accomplished list of people to this money-losing camp at the very edge of the country? Maybe it’s this unique location, for starters. The sprawling city of Juarez is visible from just about everywhere in El Paso. Mexicans spill into El Paso every day to shop. Many return home, while many others stay. The combination of these two large cities—known as the “Borderplex” or “Borderland”—is one of the largest binational border regions in the world. It’s a place where ignoring local culture—of miners, Mexican revolutionaries, mountain men and more—is ignoring reality.

It’s also a place where basketball has a storied history, from Galarza’s Bowie High School to UTEP, the large university in the heart of the city. Formerly known as Texas Western, UTEP is where Hall of Fame coach Don Haskins won 719 games, including the historic 1966 National Championship. These days, the Miners play in the Don Haskins Center, which is located on Glory Road. The program, now coached by former Haskins assistant and NBA head coach Tim Floyd, is still the biggest sports team in town.

So maybe the volunteers all come for the El Paso experience, or to feel the hoop history here. But most of all, it’s for the children of Segundo Barrio, local kids who can’t afford to attend the camp at UTEP.

Summarizes Bradburd, whose been pushing this point since he started Basketball in the Barrio: “At the bottom of all this is that NCAA coaches make hundreds of thousands off of rich children. Poor kids make up a lot of the players on NCAA rosters, but about one percent of college camp attendees. It’s an obscenity, in my view, and one that never gets talked about.”
And why do the kids come? Everyone that I ask gives the same answer. “It’s fun!”

Basketball in the Barrio does not have a website, but you can learn more about it in the eponymous, award-winning documentary at www.athletesunitedforpeace.org/p-barrio.html. Bradburd is not looking for more campers, but even capping attendance at 100 makes for an expensive endeavor. If you’re interested in helping to sponsor Basketball in the Barrio in the future, contact him at coachrus@hotmail.com. 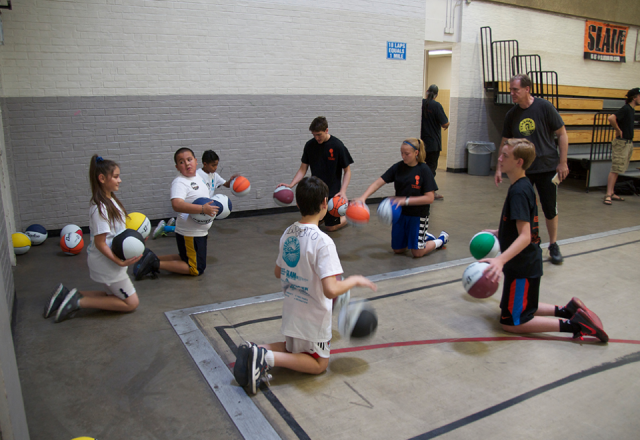 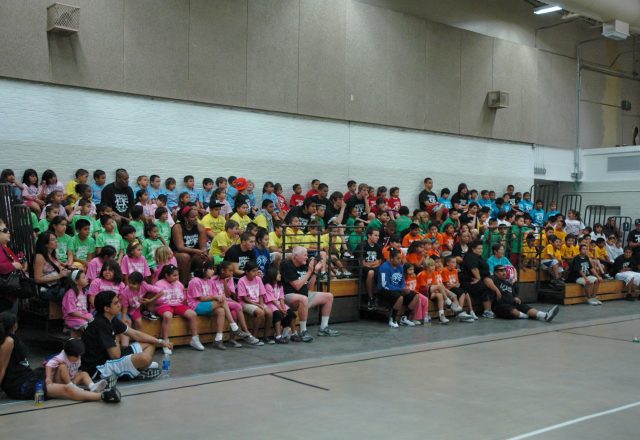 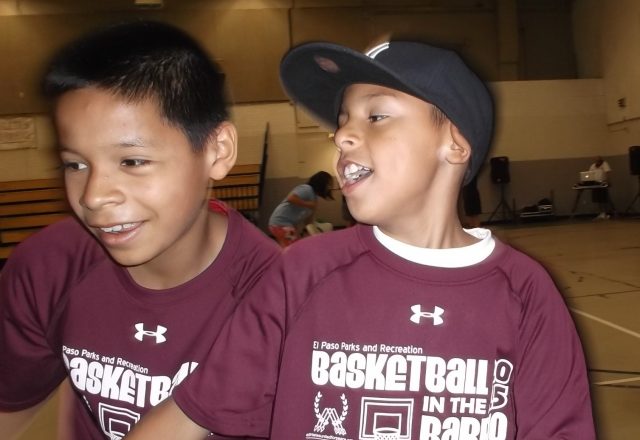