The Black Fives Exhibit Now at the New-York Historical Society

Dim lights, blue walls, and artifacts enclosed in glass cases—you’d think this was just another exhibit in a museum. It’s not.

Travel up the elevator to the New-York Historical Society’s second floor to see its new exhibition, a story of African-American basketball history—The Black Fives.

Enter through the doorway to step onto an early 1900s basketball court-themed floor, surrounded by photos, words and objects that paint the picture of African-American basketball from amateur all-black teams to a racially integrated NBA.

Visitors at the Central Park West site saw exactly what a well-dressed player looked like in basketball’s early days—with tiny fitted flannel shorts and cotton jerseys, wearing original kicks and holding a laced basket ball (it used to be two words). Scattered throughout the display are Spalding’s how-to guides, newspaper clippings, and tickets from events. Teams played special games on Thanksgiving and St. Patrick’s Day, and the match-ups were advertised as such, like today. Some things never change.

And some things do. Early on, the African-American community considered basketball a “sissy” game, but the sport took off as teams like the Smart Set Athletic Club of Brooklyn, Alpha Physical Culture Club and Washington 12 Streeters sprang up throughout the East Coast.

Then founded in 1923 was the New York Renaissance or Rens, the first African-American owned professional team in the country. This team is arguably one of the best to ever play the sport with an 83 percent winning record in over 3,000 games. After beating the white-only Oshkosh All-Stars for the World Championship, the Rens put black basketball on the map, paving the way for Earl Lloyd, Chuck Cooper and Nat “Sweetwater” Clifton to be some of the first African-American players in the NBA come the 1950s.

This is all a mere glimpse—a little preview—of the detailed story under the dim lights, between the blue walls, and inside the glass cases of the Black Fives Foundation‘s exhibit at the New-York Historical Society. You’ve got about four months to plan and make your trip. 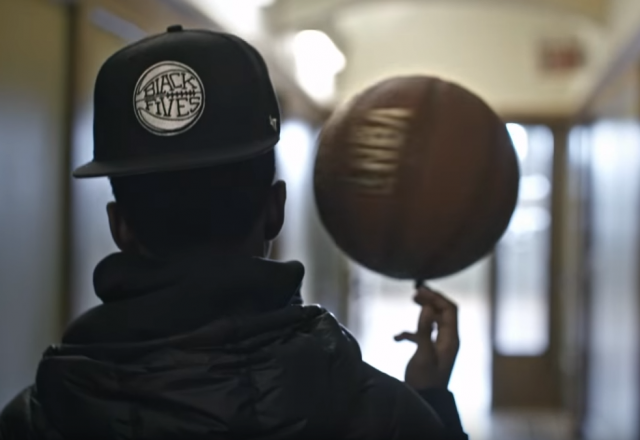