Blake Griffin Out For the Playoffs, Chris Paul Out 4-6 Weeks 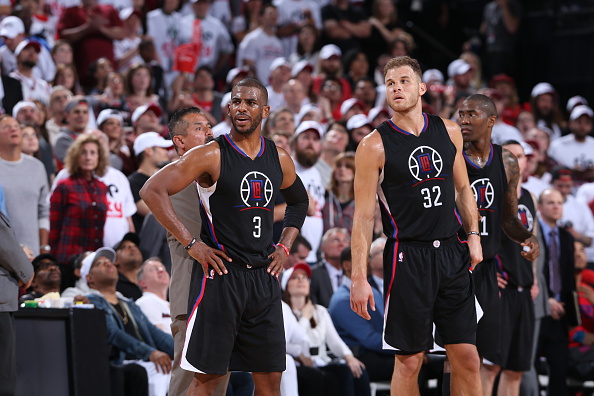 Blake Griffin is out for the rest of the playoffs and Chris Paul will be re-evaluated in four to six weeks, the Clippers announced today. Both players went down with injuries in Monday night’s Game 4 loss to the Blazers (the series is now tied 2-2). Griffin has a partially torn left quad tendon, while CP3 had surgery on his broken right hand on Tuesday morning.

The official news, first on Griffin, from the Clips:

Blake Griffin will miss the remainder of the postseason after aggravating the left quad injury that kept him out for half of the regular season.

Griffin, who missed 41 games this year with a partially torn left quad tendon, felt a tweak in the same quad while getting fouled in the third quarter Monday night by Mason Plumlee.

He went to the locker room with the sore quad before trying to return to the court, but that effort didn’t last long, as he watched the end of the game back on the bench. Griffin said he hoped the next 24 or 48 hours would have him turning a corner. That, however, won’t be the case.

An MRI on Tuesday morning revealed no further structural damage, and Griffin will be ready for the start of training camp next season, but his 2015-16 playoffs are done.

Griffin first injured his left quad Dec. 25 against the Lakers and didn’t play again until the start of April. The Clippers tried to manage his minutes in his return, since the tear was still present when he came back.

As for Paul, if somehow the Clippers were able to stay alive for another month in the playoffs, there’s still a chance he may be able to return, according to the team:

Chris Paul made his first six shots Monday night, but it’s the six weeks he’ll miss going forward that matter much more for the Clippers.

Paul underwent surgery on his right hand Tuesday morning and will be reevaluated in four to six weeks after fracturing his third metacarpal in the third quarter of Game 4.

It’s a devastating hit for a Clippers team that relied on Paul to score at least 25 points in each of his last five playoff games entering Monday night, not to mention his ability to distribute and the calming influence he provides on a nightly basis.

“Major, major blow,” said Jamal Crawford. “I just feel bad for him personally, because I know how much he puts into the game and how much he gives himself for the team.”

Paul left Moda Center in a cast and a sling after scoring 16 points and dishing out four assists with three steals in Game 4, despite playing only 25 minutes.

He averaged 23.8 points and 7.8 assists through four games of the series and also served as the primary defender on Damian Lillard.