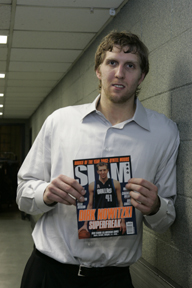 Just as with the Berlin Super Cup Notes, Germany took on Canada a few days ago to prepare for the world Championships. Linkstigator Holger was in the house…

Last Sunday was the second game of the international friendlies between Germany and Canada, this time in the Arena in Nuremberg, which is about 20 miles from where I live, so I couldn’t miss that one. And it was also my only chance to even see something from the German team before they head to Japan for the World Championships because there’s absolutely nothing on TV over here until then.

The pace for this game was set right after the German loss on Friday in the first game, with German coach Dirk Bauermann saying that his team won’t lose to the same team twice, and also Dirk Nowitzki wanting to make up for his bad performance after only one day of training with the team, especially with the second game taking place not far away from his home in Würzburg.

The house was packed with about 9,000 people attending the game, and it was incredibly hot inside (that was the moment I realized how great it was that all those EuroLeague games in the Arena I went to were all taking place in the winter). The crowd went nuts right from the start, beginning with the player introductions. Robert Garrett and
Steffen Hamann, both playing only a few miles away in Bamberg, got the loudest cheers, until Dirk came out and the place erupted for the first time.

After a few slow minutes at the start the first highlights were a pair of threes by Demond Greene for Germany, one for the tie and the next one for the lead. Dirk’s first points came after 6 minutes with a lay-up after a great assist to tie the game again, and the coach started with some early substitutions.

In the second period Canada was up by a few early, but after two threes by Jan Jagla and a fastbreak jam by Dirk, Germany was on top again. But it was still a close game, with Canada and especially Carl English hitting one three after another. The first time Germany could pull away a bit was about 3 minutes before the half, with the lead growing to 10 points after a huge dunk by Steffen Hamann after a nice backdoor cut. At the first-half buzzer Ademola Okulaja, who seems back at 100 percent after missing last year’s European Championship and a huge part of last season, put in a three from the corner after a nice drive-and-dish by Hamann, bringing the noise-level in the arena to the top again and giving Germany its biggest lead of the game, 54-42.

At halftime, the entertainment part was some German teenie-boy group or something like that, which in the end was a great idea because you could finally go outside (where it was at least not that hot as inside the building) without missing something of importance. And as I could see a lot of people might have the same idea, as it suddenly became very crowded outside.

Coming back in with 3 minutes left until the start of the second half they just finished their set (which must have been like 10 minutes or so), and all the players were already waiting on the sidelines to get on the court again for a few shots.
The start of the third was again the Carl English Show, who held Canada in the game all by himself. But he couldn’t do anything against Germany’s next run. Now everyone was clicking and hitting shots, a dunk by Nowitzki, a Mithat Demirel three, and the highlight of the game, a thunderous put-back dunk coming out of nowhere by Okulaja capped a 12-0 run and gave Germany a comfortable lead, 70-50. The energy lasted until the end of the quarter, to make it 78-53 after another Jagla three and basically making the fourth quarter into 10 minutes of garbage time.

Then it was the time of Julian Sensley, first finishing with a huge dunk, then running a lot of breaks and even hitting a three, putting Germany in front by more than 25. For a short time you could think one of the refs wanted to make the game a little more interesting at the end with a few non-calls on one side and some ticky-tack fouls on the other, but that didn’t last long. After that Canada was hitting some shots again, but that was too little too late, and at the end it was a 95-75 blowout and the crowd was more than happy.

The score could have been even higher if not for coach Bauermann having to cut down his roster from 14 to 12 players in about a week and giving everybody on the team a chance to shine, with extended minutes for a few players who are on the brink of getting cut. Top scorers for Germany were Okulaja with 16, Nowitzki (who had a much better game this time) and Jagla with 15 and Sensley with 13. For Canada only Carl English (22) and Jesse Young (10) were in double figures.

After the game I met with a friend with the hope of possibly getting some autographs of the German players, but after we got thrown out of the lower level of the Arena we nearly gave up our hope and headed to the exit which unfortunately (or fortunately, as it turned out) was closed by then. But on our way to find another exit we came by the players’s exit and stayed there for a few minutes (with some other people also waiting there), and after the Canadian team was gone the German players showed up, all very nice guys taking some time for all the people waiting for them, signing all kind of stuff and taking photos
with the fans.

The last guy coming was Dirk Nowitzki, and he got his usual special attention as everyone there wanted a piece of him. After finishing signing all the stuff he was given to sign, he headed to the exit with a few security guys. I had to go at that time, too, because I had to catch a train back home, and I couldn´t believe my eyes looking out of the door. There were a few hundred fans waiting behind some fences (I suppose that’s the place I should have been, too, if not for a little bit of luck getting me inside the player’s exit…) for Dirk, who told the securities he wants to sign autographs for those people outside instead of leaving right now. That alone should show you what kind of guy he is.

So the time I headed out was exactly the time Dirk headed out, and I have to say: that was the loudest cheer I ever got leaving a building, and I like to think that it had nothing to do with this huge blonde dude next to me…