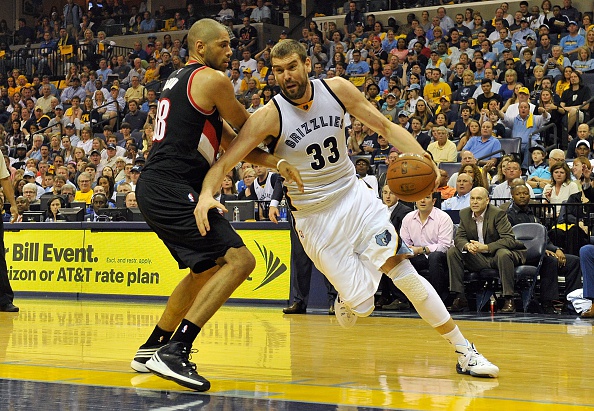 Memphis won Game 1 of its first-round series against Portland on Sunday, 100-86. It was a fairly easy victory for the home team, but the game’s result was perhaps not the most interesting part of the matchup. Reportedly, inside the Blazers’ locker room, there’s a laminated sign with keys to victory for Rip City, and one of the bullet points reads, “We don’t lose to Spanish players.”

We’re still not entirely sure what to make of the supposed “sign” in the Blazer’s locker room, but it definitely made us do a double-take when we read this column from John Canzano of The Oregonian. (Also, no love for ex-Blazers Rudy Fernandez and Victor Claver?) Read it for yourself below:

The Blazers have a laminated motivational card affixed to the television monitor in the visiting locker room. It’s titled, “We are Rip City.” It lists all the ways in which the No. 4 seed Blazers will find a way to win this series against the No. 5 Grizzlies. It begins with “We will be tougher,” and ends with, “Staying together through adversity.” But the middle part is what has to alarm anyone following this matchup closely.

Because that middle section included such oddities as, “We don’t lose to Spanish players,” and “Nobody can beat us eight times in one year.” Also, it includes a vow to, “Win the dog fight,” and, “We will play as a team and outwork Memphis each and every night.” Also, “We are better when we come to play,” and a promise to be, “(Expletives) on defense.”

Instead, Portland was mostly a sloppy pushover.

The card even has a section that includes “LA” and “Dame,” and nobody should be surprised by that. After all, it’s those two who are charged with turning a playoff series into a playoff run. Lillard gets a wide berth in Portland, but he doesn’t get a free pass. He stunk in Game 1.