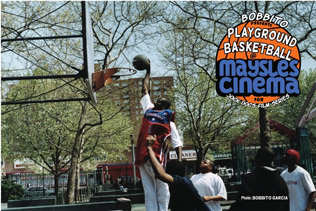 Friend of SLAM Bobbito Garcia, co-director of the upcoming documentary Doin’ It In The Park: Pick-up Basketball, NYC (360 Creative Films), has contributed to the Jock Doc film series at Harlem’s Maysles Cinema by organizing and hosting Playground Basketball this October 27th -30th, 2010.

Playground ball is not just a training ground for college and the NBA, but rather a site of culture where the sport is treated as important as life itself. Bobbito, a veteran product of this environment, has selected films from the late seventies to the present that document this history in great detail, but it is in the discussions that follow the screenings that these histories are fully brought to the audience.

Taking advantage of the Cinema’s location in Harlem, considered b-ball’s mecca, many experts on the subject will be in attendance, including current/former players, coaches, tournament organizers, “unofficial” historians of the game as well as the filmmakers. Kool Bob Love will play a role he knows well as point guard and courtside MC, keeping the conversation moving and entertaining, passing the mic to every one who has something to add. Who knows, if your questions are good enough, you might even earn a nickname!

Check the schedule below and get uptown to support!

WEDNESDAY, OCTOBER 27TH, 7:30pm
International Night
LE TOURNOI DU QUAI 54
Dir. Thibault de Longeville, 2006, 53 min.
In Paris, Le Tournoi du Quai is the world’s biggest weekend outdoor tournament, attracting teams from Japan, Italy, Spain, and the UK. The very best playground and pro players of France participate in the annual event while thousands spectate, including NBA players like Ronnie Turiaf, Boris Diaw, and Tony Parker.
HOOP HOP TOUR JAPAN
Dir. John Jay, 1996, 25 min.
In 1995, four players in Japan won a 3-on-3 tournament there, qualifying for a ten city tour of America’s top courts from Los Angeles’ Venice Beach to Indiana barnhouses to Harlem’s Rucker Park. The Hoop Hop Tour follows their journey in this short film, which has never before been screened outside of Asia.
MY GAME
Dir. Carlos Ledesma, 2007, 64 min.
My Game is about basketball in the Philippines and their most talented and respected players.  Director Carlos Ledesma spent a month with six of them to find out more about where they are in their lives, where they are going and the immense culture of b-ball in the Philippines.
After the Screening: Kool Bob Love (Moderator), Speakers TBA
_____________________________________________________________
THURSDAY, OCTOBER 28TH, 7:30pm
EBC @ Rucker Park
MTV’S HARLEM HOOPS
Prod. Jac Benson, 2003, 43 min.
The Entertainers Basketball Classic is the most famous tournament in the world.  It’s where NBA stars such as Shawn Marion, Baron Davis and Kobe Byrant can unleash moves that have never been seen in an NBA arena and play with streetball legends such as Adrian “A Whole Lotta Game” Walton and Steve “All Day” Burtt.  Hip Hop moguls such as Fat Joe, Ja Rule, and Irv Gotti all have teams and will do anything to make their team better every year no matter the cost.
ONE LOVE
Dir. Leon Gast, 2003, 10 min.
A short excerpt about Pro Rucker legend Joe “The Destroyer” Hammond, considered by many to be the best scorer New York City has ever produced, even after turning down an NBA contract from the 1971-’72 Los Angeles Lakers (who went on to break the league record for most regular season wins and won the championship).
ON HALLOWED GROUND: STREETBALL CHAMPIONS OF RUCKER PARK
Dir. Kip & Korn, 2000, 90 min.
On Hallowed Ground follows the reigning champions of the Entertainers Basketball Classic, held at Rucker Park, sponsored by Bad Boys Records.  While the film focuses on this team of amateurs filled with dazzling showmen such as “The Future”, “Half-Man Half-Amazing”, “Up North”, and “The Main Event”, it also goes deeper into the history of Rucker Park and the NBA stars and legends who have played there before such as Wilt Chamberlain, Julius “Dr. J” Erving, and Kareem Abdul-Jabbar.
After the Screening: Discussion with Anthony Heyward Jr. (aka Biz, aka OG 1/2 Man 1/2 Amazin’)
____________________________________________________________
FRIDAY, OCTOBER 29th, 7:30pm
NYC Playground
AMERICAN GAME
Dir. Anthony Jones, 1979, 89 min.
The American Game is a 1979 documentary directed by Jay Freund and David Wolf contrasting the experiences of two high-school seniors from remarkably different backgrounds.  Brian Walker is taken from his close-knit Indiana family, living in a small town. In contrast, Stretch Graham has practically no family support, and looks to his Brooklyn team and his warm-hearted coach for support. This film is extremely rare and is unknown even in the most diehard b-ball junkie circles!
HEART AND SOUL OF NEW YORK CITY
Dir. Kevin Couliau, 2010, 5 min.
French director Kevin Couliau spent the summer of 2009 in New York City so that he could capture what playground basketball is all about.  With amazing visuals, this short, featuring music by producer Pete Rock, shows NYC at its best and will doubtlessly inspire many a viewer to suit up and play afterwards!
ASPHALT PHENOMS OF NEW YORK CITY-THE LOST YEARS
Dir. Dorian Graham, 2007, 45 min.
Directed by ex-playground star, Dorian Graham, Asphalt Phenoms of New York City-The Lost Years tells the story of the game prior to the AND 1 Mixtape phenomenon.  This film goes deep into the culture of the late ’80s and shows what hot summers were all about before it became a worldwide craze. Interviews from two-time NBA champion Kenny “The Jet” Smith, legends “Speedy” Williams, “The Terminator” and more.
After the screening: Filmmaker Dorian “Black Stallion” Graham & former players, Kool Bob Love (moderator)
_____________________________________________________________
SATURDAY, OCTOBER 30th, 7:30pm
Sneaker Night
THE MYSTERY OF FLYING KICKS
Dir. Matthew Bate, 2009, 14 min.
The Mystery of Flying Kicks tries to solve the mystery of why it is hard to avoid seeing sneakers on power lines in almost all urban areas.  Made completely from donated photographs, video, phoned in theories, artwork and animation. The Mystery of Flying Kicks tries to find the truth of why shoes always end up on telephone wires.
AIR FORCE ONE: ANATOMY OF AN URBAN MYTH
Dir. Thibault de Longeville, 2010, 75 min
Before the 1980s basketball shoes were so uncomfortable that players had to wear more than one pair of socks for cushioning.  Then the Nike Air Force One came out and started a new era in ballin’ and sneaker culture.  This documentary tells the story of how one pair of shoes swept the nation and went from being a shoe worn only on courts to an iconic item that people collect and wear every single day.
After the screening: Anthony Gilbert, Kool Bob Love (moderator), more speakers TBA
_____________________________________________________________
Maysles Cinema
343 Lenox Ave
(127th and 128th streets)
New York, NY 10027