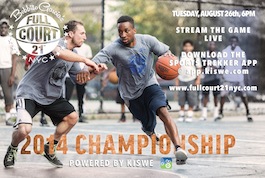 What started off as a simple creative idea to mix things up in the NYC summer basketball playground scene has gradually grown into an intense level of competition on the blacktop over the last few weeks that will culminate with tomorrow’s championship game being streamed live at 6pm. This innovative basketball tournament concept has adopted the traditional ’21’ playground game, where all players are on their own and must reach 21 points in order to win, but it’s played by running a full-court instead of the common half-court setting. For those interested in watching the championship game for this first-of-its-kind streetball tournament, simply download the Sports Trekker app at here. And if you’re in the NYC area, the action will be taking place at Booker T. Washington Playground (108th Street between Columbus & Amsterdam Avenue) beginning at 6PM. For more information, visit www.fulcourt21nyc.com.