Officer Bobby White fosters the relationship between police and their communities through basketball. 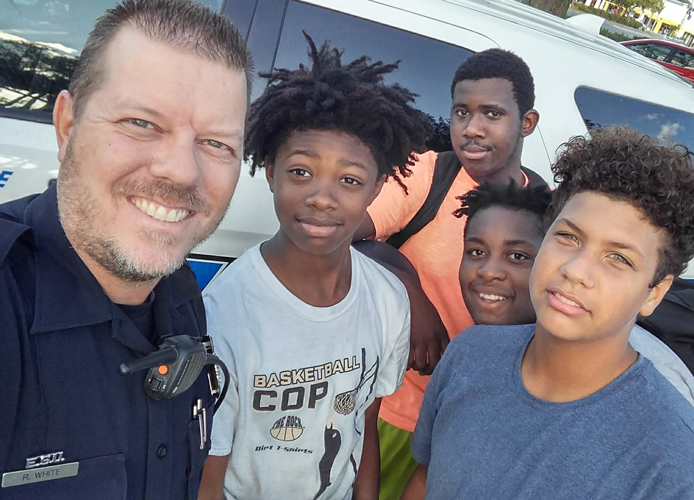 It’s an early Friday evening in January—the perfect time for a group of Florida teens to enjoy some outdoor hoops after the end of a school week. But when the clock strikes 5:01 P.M., a neighbor has had enough of the kids’ noise and gives a call to his local police department to complain. Officer Bobby White decides to handle this one himself.

“Some people don’t like the sound of kids playing basketball in the street. The ball bouncing gets a little loud, so I figured that’s what it was,” says the Gainesville, FL, policeman. “There’s no way I was going to make them stop playing basketball.”

Instead, Officer White stepped out of his police car and started shooting hoops with the group of Gainesville kids. #HoopsNotCrime, as his saying goes. The encounter was caught on camera thanks to his dash cam, and the public information officer back at the station, Ben Tobias, uploaded an edited version of the video to the Gainesville Police Department Facebook page.

“I intended that video to be viewed by Gainesville residents to show, ‘Hey, look…you may see stuff on national news that talks about how bad police are, but this is what we do,'” says Officer Tobias.

In just six hours, the video spread far beyond Gainesville. In fact, it garnered about a million views from Facebook users all around the globe. Officer White’s impromptu ball game with some “noisy” young hoopers officially went viral. It even received attention from Shaquille O’Neal, who surprised the kids with a pick-up basketball game, the Orlando Magic, who brought out the group for court side seats, and the NBA, who invited Officer White to speak at a discussion during All-Star Weekend earlier this year.

But according to Officer White, that’s all sort of “old news.”

Since that dash cam video went viral back in January 2016, Officer White began the Basketball Cop Foundation, a non-profit organization that seeks to better the relationship between the police and their communities through the game of basketball. Using methods of crowdfunding to pay for expenses , the foundation provides sports equipment like hoops and balls to different police stations around the country so they can then donate them to their local communities that are in need.

“To [the communities], it’s not from me. It’s from their local police,” says Officer White. “Those little things go a long way. On top of that, the bigger thing I’m trying to do is plant a seed for that agency…so they can start doing more things on their own.”

In his local Gainesville, Officer White tries out different projects that can then serve as an example to other  police departments. Barbecue cookouts, basketball games between the youth and cops, and other events are held to foster the relationship between law enforcement and the cities they serve.

It’s no secret the reputation of the police has been in a downward spiral recently, with many injustices spreading like wildfire on social media and in the news. In many neighborhoods, kids only see negative interactions with the police. With these less than ideal examples often being the only exposure children have to the police, their feelings toward officers will most definitely be pessimistic more times than not.

“If the narrative or the mood or the attitude is negative towards the police, then that’s all [the kids] know,” says Officer White. “It’s challenging for us [police officers], and we have to go out there and change that.”

And that’s exactly what Officer White has been doing his entire career. When he pulled up to the kids playing basketball that evening, their body language revealed they weren’t too thrilled to see him. Little did they know, Officer White simply intended to meet a group of kids he never had the chance to meet. He took it as an opportunity to make a positive connection and figured the basketball he kept in the trunk of his police car would come in handy.

“In their experience, they haven’t had a cop proactively go out and positively interact with them. They assumed that I was gonna come and give them a hard time.”

Instead, Officer White got those kids 17 million views on Facebook, a pick-up game with Shaq, and many phone calls with NBA teams and media outlets. It’s safe to say Officer Bobby White AKA Basketball Cop made all the right moves that evening in Gainesville. It was a pleasant surprise and life changing moment for those young ballers and a much needed refreshing story for the rest of us.

Support the Basketball Cop Foundation here to further foster the relationship between law enforcement and their communities through basketball, and learn more about the nonprofit here.