Boston Celtics May Play a Game at Fenway Park 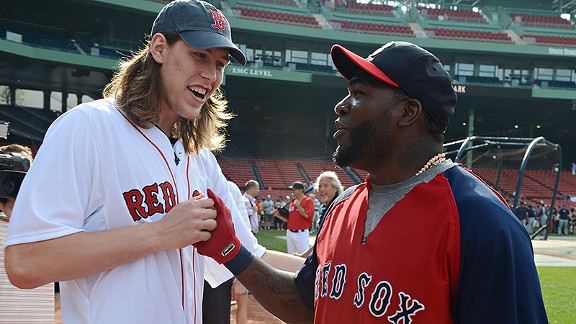 According to Boston Celtics president Rich Gotham, the team has had exploratory talks with the Red Sox about a possible outdoor game at the famed Fenway Park.

The idea began to gain traction once the NHL’s Winter Classic became a hit with fans.

The Phoenix Suns played outdoor preseason games at a Palm Springs, Calif., tennis stadium from 2008 to 2010, but before anyone gets too excited about Beantown, the C’s and Sox must first figure out how to work around each other’s scheduling and the local weather.

The Winter Classic game between the Bruins and the Canadiens on New Year’s Day was a novelty and a curiosity. There were 67,246 fans at Gillette Stadium, the game was on national television, and Patriots coach Bill Belichick even took a turn on a pair of ice skates the day before the game. […] And Friday, Celtics coach Brad Stevens said he’d heard the idea floated that the Celtics might someday take one of their games outdoors, too. While that possibility remains a long way from materializing, it might be more than a pipedream.

“I’ve gotten into it. I really do like the idea,” Gotham said. “I think if you can find a way to sort of differentiate the game and make it fun for fans, that’s a great thing. And the Winter Classic certainly does that. Even when Fenway stages certain events, like football games, it just makes it more special for people involved and the fans. I think if you can do it, great. At the same time, my job requires me to be pragmatic, so you’d need to look at the hurdles.”

The main and obvious obstacles, Gotham said, are weather and scheduling. The Celtics certainly would not play at Fenway in the dead of winter. And as New Englanders know, bitter chills can arrive early and end late, so that would mostly leave late October or early April as the most suitable options. […] That is where scheduling issues would come into play, as the Red Sox could be competing in the postseason in October, and their regular season will be revving up in April.