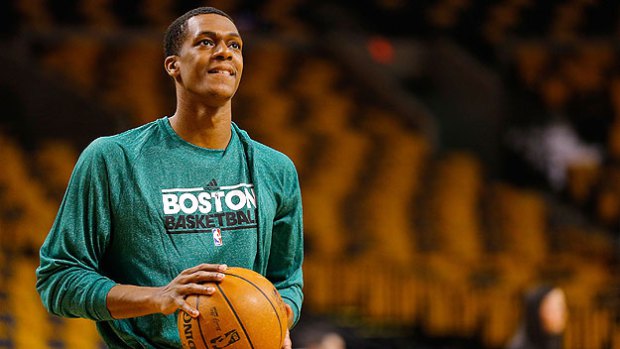 The Boston Celtics certainly aren’t going to contradict what Rajon Rondo’s camp put out. Both sides say that a trade request has not been made by the four-time All-Star floor general.

Celtic execs and coaches are looking forward to Rondo playing like his old, dynamic self next season. Per CSNNE:

“It was news to me,” Celtics president Rich Gotham said during a break as one of the Celtics volunteers, along with Harvard Pilgrim Health Care and City Year, participating in the service day at Hennigan Elementary School. “It [a trade request] has not been communicated to us by Rajon.”

Gotham added, “it’s more of an issue for the media than it is for us. We have a good sense of reality in relation to Rajon and all of our players. We don’t get caught up in the rumor mill or any of that stuff. What we focus on with Rajon is getting him ready to play. What we want to see is the Rajon rondo from 2011, 2012, back in his best form. That’s what gets us excited. When we talk to Rondo, that’s what we talk about. We’re not talking about trades.”

“It’s very important. It all starts with him,” Celtics assistant coach Walter McCarty said of Rondo being around most of this summer (working with the team’s younger players.) “We built this team around him. He knows that. He understands that. When he’s around, other guys figure, ‘hey, if he’s around I need to be around too!’