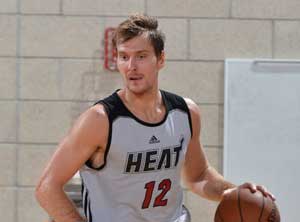 After recently acquiring Zoran Dragic from the Miami Heat via trade, the Boston Celtics have now waived the Slovenian player. Goran’s younger bro will most likely sign with a team in Europe for consistent playing time. Via the Celtics:

“The Boston Celtics announced today that they have waived guard/forward Zoran Dragic.

Dragic, a 6’5” guard/forward, was originally acquired by the Celtics along with a future second round pick and cash considerations from the Miami Heat on July 27, 2015. He appeared in 16 games split between the Phoenix Suns and Miami Heat during the 2014-15 season and averaged 1.8 points in 4.7 minutes per game over that span. He posted a season-high 22 points on 9-17 (.529) shooting from the field, three rebounds, two assists and two steals in 41 minutes of action against the Philadelphia 76ers on April 15, 2015.”