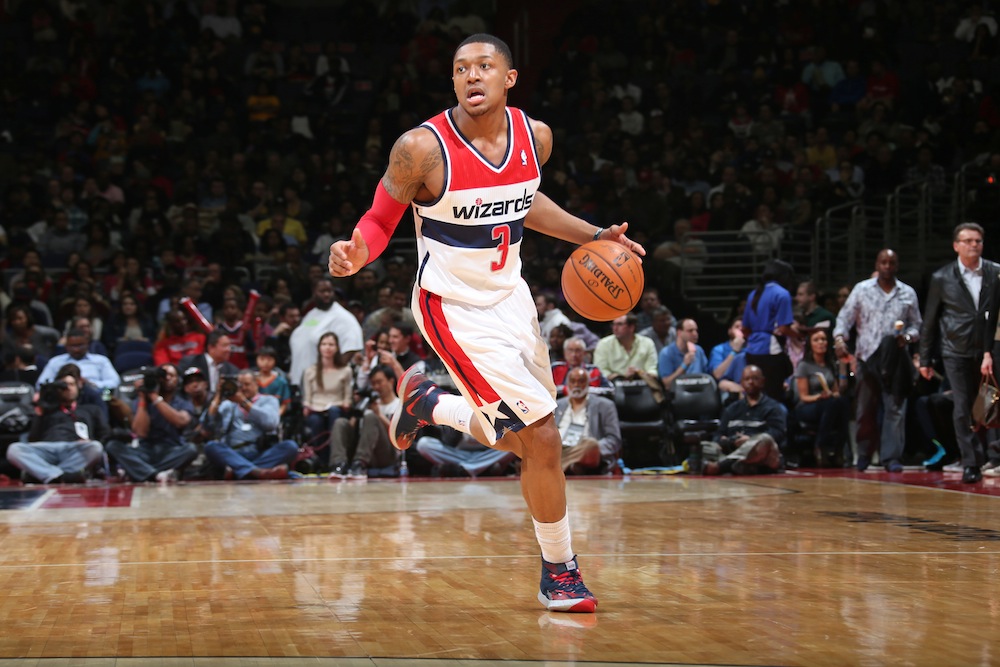 The Washington Wizards turned some heads earlier this postseason, blowing by the Bulls in the first round and scaring the crap out of the Pacers in the Eastern Conference Semifinals. During that stretch, second-year guard Bradley Beal led the team in scoring at 19.2 ppg, to go along with 4.9 boards and 4.5 dimes a night in his first taste of the NBA Playoffs—all significant increases from his equally impressive regular season stats.

Fitting, as on Tuesday, Beal was kicking it at annual video game trade show E3 in Los Angeles on behalf of Activision, along with Rockets SG James Harden. While there, Beal was among the first gamers to check out brand new titles Call of Duty: Advanced Warfare, Destiny, and Skylanders Trap Team.

As outstanding Beal has been thus far in his young NBA career—we profiled his experience at All-Star Weekend in SLAM 177— it’s easy to forget that he won’t even turn 21 until later this month. Still a kid, the Wizards’ budding star feels just as comfortable with a controller in his hands as he does with a basketball.

Before his day in L.A. was out, Beal jumped on the phone to update SLAM on his offseason plans, his hopes for Washington’s free agency period and more.

Bradley Beal: Personally, I’d say Call of Duty for sure. I’m a big Call of Duty guy. I think the new game, Destiny, is going to be pretty good as well. It’s kind of a toss up between those two, really. But I’ve been favoring Call of Duty more than anything.

SLAM: What were some of your favorite video games growing up?

BB: Growing up, I was a Mario Kart on N64 kind of guy. That was a long time ago. I had Dreamcast, too. We didn’t have Call of Duty and all the games they have now.

SLAM: Who’s the best gamer on the Wizards?

BB: I’m going to say myself. There are a lot of us, depending on what game we’re playing. In Call of Duty, I would say either Glen Rice or myself. John Wall plays it a little bit. We’ve got a couple on the team that aren’t too shabby.

SLAM: OK, but who’s the most competitive?

BB: I think everybody is. We all hate losing, no matter what it’s in, especially gaming. I hate when I lose in video games. Especially if it’s someone I know, because then they get bragging rights all the time. So whenever I get a chance to excel and win a game, I’m always on top of it.

SLAM: What’s the most common video game being played in the Wizards locker room?

BB: If it’s not Call of Duty, it’s a sports game, like Madden or 2K. But now that the new Call of Duty is dropping, it’s definitely going to be that.

SLAM: When you play an NBA video game, do you always try to play as yourself? Or who’s your team?

SLAM: That’s funny, since you’ve been kind of a Knick killer recently.

BB: [Laughs] If that’s what you want to call it. But that’s my go-to team on there.

SLAM: What was your reaction to Coach Randy Wittman getting an extension?

BB: I was thrilled. I was excited to see that, because Coach Witt is a great coach, for one. And on top of that, he has a great system in place. We can definitely use this season to build off. What he brings to the table is tremendous for myself, firstly because he played my position in the NBA, and then he knows what he’s talking about. We’re all out there learning his system and playing the right way, and it’s fun at the end of the day. I’m definitely happy that we have him back on board for three more years.

SLAM: He doesn’t play video games, does he?

BB: Nah. Witt’s a old head, he doesn’t do video games at all.

SLAM: The front office has some tough decisions to make this summer, specifically with Trevor Ariza and Marcin Gortat. How important is it to you to have both those guys back next year?

BB: It’s very important. I’m probably going to go out to dinner with Trevor tonight and try to convince him to stay. It’s definitely important for us to be able to get both of those guys back, because they’re both key parts of our team, both of them. If we get them back, we’ll be excited, thrilled. But whatever decision those guys make, Im’ going to be supportive of it. Hopefully it’s to be with us next year, but they’re still family, and we want them back.

SLAM: So when you take Trevor out to dinner, you picking up that tab?

SLAM: If the whole team comes back intact, do you think we’ve seen the full potential of this Wizards squad yet?

BB: Hopefully, we can get further next year than we did this year. We know, we’ve got to use this as a stepping stone for us. The Eastern Conference Finals is a goal we’re going to have moving into next season. Hopefully we can build off what we accomplished this past year and get off to a great start again.

SLAM: What was it like to get that taste of the Playoffs?

SLAM: If the roster remains intact, where do you see the Wizards in the pecking order of the Eastern Conference next season?

BB: We’re definitely expecting to get home court advantage next year. We had it in our hands this year, we had the opportunity to do so, but we let it slip out of our hands. Now, for next year, I think we have a great opportunity, because everybody is going to put in a good offseason, and we’re going to come in with a lot better focus from the start. We know what’s at stake, we know what we’re capable of doing and what kind of team we can be. We’re going to come in with confidence and hopefully get to the same place and be better next year.

SLAM: Did you think John Wall should have made one of the All-NBA teams?

BB: I think so. But it is what it is. I think he definitely proved himself to be one of the best point guards in the League today, and throughout the whole season. It is what it is, he’s not going to let that affect him. He’s going to continue to get better and hopefully next year, he’ll be on it.

SLAM: Are you watching the Finals?

BB: I’ll watch a little bit. It’s hard for me to watch, because I know it’s possible we could have been there. But I’m still watching, and nitpicking, and taking some things from guys who I admire and watch.

SLAM: Any thoughts on the series so far? Or a prediction on who wins?

BB: I have no idea, man. Because this is like a roller coaster. Both teams can win at home or win on the road. It’s going to be a toss up. I think it’ll definitely go to 7. I really don’t have a favorite right now. I hope they both lose, if that’s possible.

SLAM: Are you looking forward to Team USA stuff next month?

BB: Definitely, man. I played with the USA team when I was 16 and 17 [Beal helped the USA win gold at the 2009 FIBA Americas U16 Championship in Argentina and the 2010 FIBA World U17 Championship in Hamburg.—Ed.], so just to be a part of that family and that history, and to have the opportunity to represent the country again and be on the national team is definitely the No. 1 goal ever, so hopefully I’ll have that opportunity to make the team. And if not, I’m still fortunate just for the opportunity I was given.

SLAM: Do you have any other big plans for the summer?

BB: Not really. I’m just going to relax, take a little more time off, probably go on vacation somewhere. And then get back to it. Team USA is rolling around pretty soon and then eventually, the season is going to start back up again, it’s like clockwork.

SLAM: What was your reaction to your name being mentioned a little bit recently in possible trade rumors with Kevin Love?

BB: I heard it. But I wasn’t really too worried about it, because I talked to the GM [Ernie Grunfeld] and the Owner [Ted Leonsis] of the team, and Coach Witt, so I had nothing to worry about. At the end of the day, it was what it was. I think people kind of used that for leverage or whatever, but I’m not worried. I’m going to control what I can control, and I’m really focused on playing with the Wizards right now.

SLAM: Are you going to get a chance to sit down and chart out your personal goals for the 2014-15 season?

BB: I’ll probably do that when it comes closer to training camp, maybe around August or September. That way, I can focus on what I can improve on, what I can continue to get better at and that way, coming into training camp, I’ll have a great mindset and be ready to go.

SLAM: Are there other guys in the League now or former NBA guys who you look at their career paths or their games and think, ‘That’s a good model for me?’

BB: Yeah. I take something from pretty much every 2-guard that I go up against, whether it’s DWade, Ray Allen, James Harden, Kobe or whoever it is. I take something out of each of their games and try to implement it in mine as much as I can. Those guys are all good, and I still have a lot of work to do. I’m a young guy in the League so I still have plenty more years ahead of me, with good health. But most definitely whenever I play against somebody, I’m always making mental notes and try to implement some of their attributes into mine.

BB: Man, I eat pretty much everything in sight, that’s why I have the name. My dad cooks a lot, so whatever he’s whipping up, I’m eating that. Whatever it is, if I’m going out to eat, if I’m eating at home, that’s definitely who I am. I just eat a lot. That’s how I got the name.