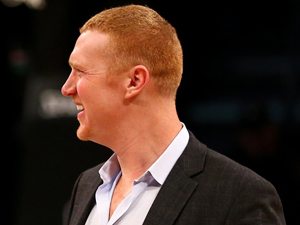 The White Mamba wrote his own little essay about his future career plans a la LeBron James. Scalabrine announced, “I’m Coming Home” to let his Celtics fans know that he will be returning to Boston as a broadcaster. Here’s an excerpt from his hilarious piece on Comcast SportsNet:

“I’m doing this essay because I want an opportunity to explain myself uninterrupted…and gather some great press based on another recent NBA signing…in almost the exact same way.  I don’t want anyone thinking: He and Mark Jackson didn’t get along … The Bulls and Warriors couldn’t put the right team together … Does anyone really care what Brian Scalabrine is doing right now?  None of these things were true.  And for the record I never played for the Warriors, I was just a coach, didn’t people see me holding my clipboard.  I don’t understand why people couldn’t put it together, I was holding a clipboard, I was a real coach.”