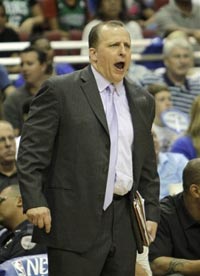 This is exactly how we do it in Chi-Town.

Last night, the Chicago Tribune reported that VP John Paxson and GM Gar Forman flew to L.A. with hopes of formally interviewing Tom Thibodeau for the Bulls head coaching position. But not so fast…

In a report by the Chicago Sun-Times (Chi-Town’s ‘other’ newspaper and the Tribune‘s chief rival), Danny Ainge was quick to deny the Tribune‘s report, saying, “I don’t know a thing about [the meeting].” To add to the confusion, meeting with Thibodeau would mark a breech of the NBA’s tampering laws:

With the Celtics scheduled to play Game 1 of the NBA Finals tonight against the Los Angeles Lakers at Staples Center, Paxson and Forman would be guilty of an enormous breach of NBA protocol and ethics if they attempted to interview Thibodeau without Ainge’s explicit consent while the Boston postseason continues.

Said Jeff Twiss, Boston’s veteran vice president of media relations: ”Unless I’m missing something here, everything on the court involving the Boston Celtics — personnel, coaches, support staff — is under Danny’s watch. Everything goes through him. That’s just the way it is in our organization.

”If Danny doesn’t know anything about it, quite simply, we’re denying it,” Twiss said. ”I am very surprised. Times have changed, but there still are normal policies and procedures.”

Asked if there’s any chance Paxson and Forman have received permission to interview Thibodeau, Twiss reiterated: ”Again, Danny is the only one who could answer that question, and he has said quite clearly, ‘No.”’

The Bulls had plenty of time to interview him this week (ESPN reported Thibodeau interviewed with the Nets before the Cs left for L.A.), but somehow, Paxson and Forman found themselves sitting in their L.A. hotel room waiting for a Thibodeau callback.

Reports are now saying New Orleans plans to soon offer its vacant coaching job to Portland assistant Monty Williams. Considering Pax and Gar are holding Thibodeau hostage in his hotel until the tip-off, he probably won’t be accepting.