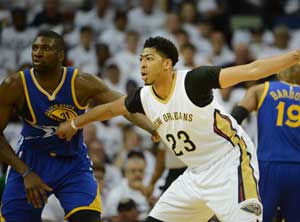 The 2015-2016 NBA Season schedule is officially released! On NBA Opening Night—Tuesday, October 27, 2015—the Chicago Bulls will play host to the Cleveland Cavaliers as the first game of TNT’s double-header. The second of the two games will feature the 2015 NBA Champions, the Golden State Warriors, receiving their rings and then hosting their former first round opponents, the New Orleans Pelicans.

More from the NBA:

The NBA’s 70th season begins on Tuesday, Oct. 27, as part of Kia NBA Tip-Off 2015, with a doubleheader on TNT, marking the 20th straight year the network has started with two games on the season’s first night. In the first game, LeBron James and the reigning Eastern Conference champion Cleveland Cavaliers visit new NBA head coach Fred Hoiberg and the Chicago Bulls (8 p.m. ET). The second game follows league tradition of showcasing the defending champions at home on opening night, with 2014-15 Kia NBA Most Valuable Player Stephen Curry and the Warriors receiving their rings in a nationally televised ceremony before taking on Anthony Davis and the Pelicans (10:30 p.m. ET).