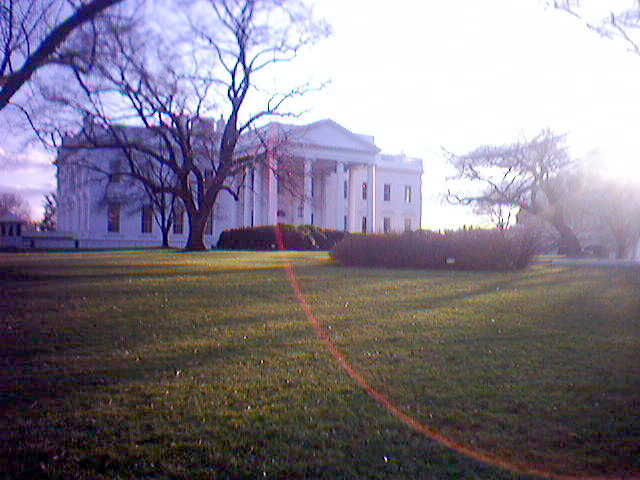 Toward the end of last season, just after the trade deadline, I drove down to Washington D.C. for a day to do a story on Peja Stojakovic, as the Pacers were playing the Wizards. I got to D.C. early, because I love seeing the history and the old buildings and all that stuff.

When I walked past the White House, there was a big black fence surrounding the building, but that didn’t seem to be stopping people from walking right up to it and leaning on it, leaning through it, reaching inside the fence — basically, whatever they wanted to do. I wanted to get into the act as well, so as the sun was setting, I reached between the bars and snapped a photo of the White House. Not sure why it all worked out so well, the lighting and composition and such, but it might be the greatest photo ever taken with a Sidekick.

As I walked over to the MCI Center (or whatever it’s called these days) I thought about how impressed I was that even though our nation was involved with a war and we had a perpetual terror alert, our citizens were still allowed to walk right up to the White House and reach out for it. It belongs to the people, after all.

Or, as former Charlotte BETcat Lonnie Baxter found out last night, the White House belongs to the people as long as you don’t shoot a gun out a car window as you drive past it. (Allegedly, of course.)