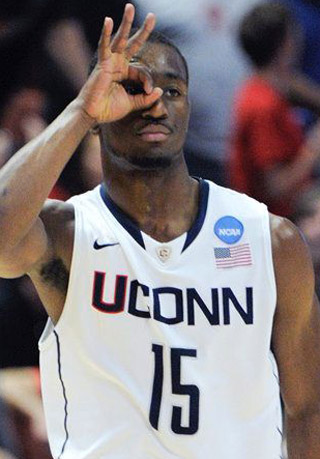 The excitement of Friday night’s Sweet 16 games carried into Saturday as Butler and UConn advanced to the Final Four with two games that came down to the final shot.

In the day’s first game, Butler rallied late to forced overtime and eventually defeat Florida, 74-71. Trailing by nine points with just over seven minutes remaining, the Bulldogs once again refused to fold. Butler closed the half on a 16-7 run and even had a chance to take the lead with just over 30 seconds remaining when Matt Howard missed the second of his two free throw attempts. Florida’s Erving Walker missed a 3-pointer as time expired and the Gators headed to their second straight overtime game.

In the extra session, each team exchanged big shot for big shot as the margin never got grew greater than three during the final five minutes. A 3-pointer by Shelvin Mack with 1:21 remaining put Butler up for good at 72-70. Mack finished with a game-high 27 points.

Florida had a chance to win and then later tie, but Walker and Kenny Boynton both missed long 3-point attempts.

The win marks back-t0-back appearances in the Final Four for Butler. This year’s run might be even more impressive as the Bulldogs were an 8-seed and had to beat three of the top four seeds in the region to make it to Houston. Brad Stevens’ crew awaits the winner of Kansas and VCU.

In the nightcap, UConn survived a late rally by Arizona to win 65-63 and advance to its second Final Four in three seasons.

Things got dicey for the Huskies in the final seconds as Derrick Williams and Jamelle Horne missed 3-point attempts to win the game on the final possession.

A resilient Arizona squad battled back from a seven-point halftime deficit to seize the lead on two separate occasions in the second half. But in the end it was too much Kemba Walker and Jeremy Lamb for the Wildcats to handle. Walker finished with 20 points and 7 assists while Lamb chipped in 19 points.

Williams, who sat with foul trouble for most of the first half, likely closed his college career with 20 points and 5 rebounds.

The Huskies have now won nine-straight games dating back to the first round of the Big East tournament. Their next game will come in the Final Four when they face the winner of North Carolina and Kentucky. UConn beat Kentucky 84-67 back on Nov. 24 in the final of the Maui Invitational.