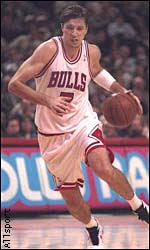 Pretty much every foreign-born player in the NBA was raised on Michael Jordan. Dirk Nowitzki, Pau Gasol, Manu Ginobili, Tony Parker, Peja Stojakovic, Andrei Kirilenko, hell, even Darko Milicic. Ask any of them. Even if they weren’t old enough to catch MJ’s championship runs with the Bulls firsthand, they undoubtedly memorized his moves from Come Fly With Me and the rest of the DVD set. But only one foreign-born NBA player was actually raised BY Michael Jordan. That would be Toni Kukoc.

The 38-year-old forward, who announced his probable-almost-definite retirement on Monday, was the last active link to the Jordan-led championship teams. Drafted by the Bulls in 1990, Kukoc didn’t come to Chicago until 1993. He was already a star in Europe, having won championships with Jugoplastika Split and the European Player of the Year award (three times!) with Benetton Treviso. A 6-11 forward who could play all positions, Kukoc earned the nickname “The Waiter” for his deft passing ability. Bulls GM Jerry “Sleuth” Krause was drooling on himself even more than usual over the thought of adding the multi-talented Kukoc to a lineup that already included Jordan and Scottie Pippen. Krause was so enamored with Kukoc that signing the big Croat to a contract even took precedence over renegotiating Pippen’s deal—a fact that irked Pippen to no end.

Pippen (and Jordan) had a chance to stick it to Kukoc personally in the 1992 Olympics when the Dream Team faced off with Kukoc’s Croatian squad twice—once in the early rounds, and then again in the gold medal game. The US won by 33 and 32 respectively. (To Croatia’s credit, it’s as close as anyone got that year—Team USA’s average margin of victory was 43.8 points).

When the 1993 season came around, Kukoc finally became a Bull. Krause’s dream lineup wasn’t to be, though—Jordan had already announced his retirement. And with Pippen and Horace Grant firmly entrenched at the forward spots, the 24-year-old Kukoc would have to come off the bench. He still managed to average double-digits and make the all-rookie second team. Perhaps his defining moment came in the conference semis against the Knicks. Trailing by one with 1.8 seconds left, coach Phil Jackson drew up a play for Kukoc, with Pippen acting as a decoy. Disgusted, Pippen refused to go back in the game. And as veteran center Bill Cartwright berated Pippen on the bench, Kukoc took the shot and won the game.

The following season, with Grant moving on to Orlando, Kukoc moved into the starting lineup. He finished second to Pippen in points, rebounds and assists, despite still not playing a lick of defense. But then Jordan made his heralded comeback, and the Bulls acquired Dennis Rodman in the offseason, so Kukoc went back to the bench. He would stay there for the next three seasons, earning one Sixth Man award and three championship rings. Each year, he was the team’s third-leading scorer.

When the Bulls were disbanded following the ’98 season, Kukoc stayed. Most likely, Krause couldn’t bear to deal the player he’d waited so long for. Kukoc returned to the starting lineup, and led the team in points, rebounds and assists in the lockout-shortened ’99 season. He also—despite the team’s new lottery status—maintained the arrogant behavior of the salad days, getting dressed in a back room and not emerging until media time was up. Like any of us were really waiting around for Toni Kukoc.

The following season he was traded to the Philadelphia 76ers, where he became just another player to not help Allen Iverson to a championship. Then he was a Hawk, then a Buck—which placed him back close to his Highland Park, Illinois home. He also found his way back to the bench, starting only 61 games after leaving Chicago.

Now, graying and approaching 40, he’s chosen retirement after the Bucks and Bulls failed to express interest. He’d rather stay close to home. And who knows? Maybe he’ll even get a chance to play with Jordan again. “I always felt like I needed to play basketball,” Kukoc said when announcing his decision. “Right now, it’s not my most desirable thing anymore. I’d rather play golf.”