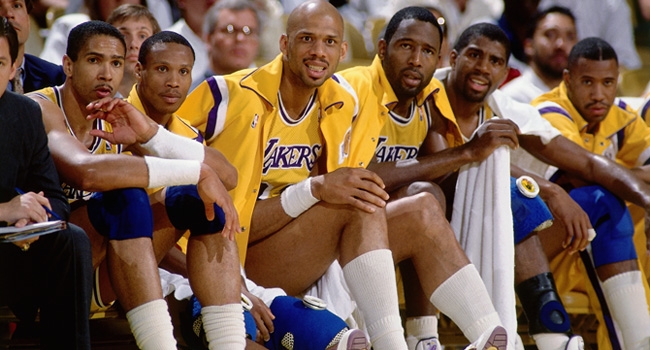 Despite Kobe Bryant’s pre-game hopes and wishes, the Golden State Warriors beat the brakes off the Los Angeles Lakers on Tuesday night for their record-setting 16th win in a row to start the season.

Lakers head coach Byron Scott was asked about a hypothetical matchup between his Showtime squads and the present-day Dubs, and Scott naturally gives the edge to the team that won five titles during the 1980s.

Scott, a member of three title-winning teams, concedes that the defending NBA champs would have no trouble at all beating the current Lakers if they somehow met in a Playoff series.

So Coach Byron Scott gladly ran with a question about the old days — would the “Showtime” Lakers beat the present-day Warriors? […] “In a seven-game series? Absolutely!” Scott said Tuesday.

He wouldn’t, though, commit to the present-day Lakers beating Golden State, saying, “They would probably win that series right now. Let’s just say that.”

“The one thing this [Warriors] team couldn’t do on a daily basis against us, that they’re doing against everybody else, is go small,” Scott said. “We’ve got Magic [Johnson] and James [Worthy], and Kareem [Abdul-Jabbar] as a post-up player to demand a double-team. It would be a whole lot harder.”