Carmelo Anthony to Sit Out With Deep Finger Cut (UPDATE) 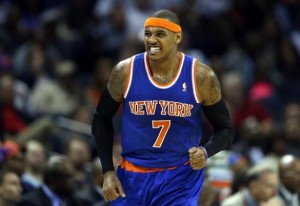 UPDATE: The New York Knicks confirmed that Carmelo Anthony is officially on the Chillin’ List due to a deep cut on his left middle finger. ‘Melo will sit out tonight’s nationally-televised game against the Miami Heat, and there’s no word yet on when he will play again. From the team’s Twitter page:

“[email protected] is out tonight with a laceration on his middle finger. @RealJasonKidd is in the starting lineup.”

Due to a finger injury against the Charlotte Bobcats, Carmelo Anthony could end up missing tonight’s showdown in Miami against the Heat. ‘Melo, who suffered a deep cut on his left middle finger while diving for a loose ball, says he’s not sure yet if he can play. Per the NY Daily News: “The finger on Anthony’s non-shooting hand was heavily bandaged afterward, which makes him a game-time decision against LeBron James and the Heat. ‘Right now it’s numb so I don’t know,’ Anthony said after the Knicks, owners of the best record in the East, improved to 13-4. ‘I’m not getting on Southwest. I’m going to Miami.’ The reference, of course, was to the controversy surrounding the San Antonio Spurs last week and the team’s decision to send Tim Duncan, Tony Parker, Manu Ginobili and Danny Green home on a commercial airline rather than play the Heat. The flight that may prevent Anthony from taking the court was his decision to dive head-first for a loose ball that was headed for the Knicks bench. It was a valiant effort but a costly one as Anthony cut his hand on a metal container behind the bench that is used to keep heating packs warm. […] ‘I want to play against Miami,” said Anthony, who isn’t sure if he can catch or control the ball with his finger bandaged. ‘But at the end of the day I have to do what’s right for my finger. It’s a deep cut. If I can’t play then I’ll see them two more times.’ He then added: ‘I’m going to take some time off from diving into the stands.'”