Carmelo Anthony: Money Not a Factor When Re-Signing With the Knicks 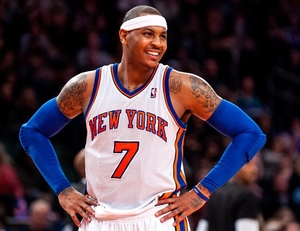 The New York Knicks threw $124 million at free agent superstar forward Carmelo Anthony this summer, which made his heart sing. But Melo insists the gargantuan five-year contract had nothing to do with his decision to return to Gotham. Per ESPN:

“I want to win. I don’t care about the money,” Anthony said. “I believe Phil (Jackson) will do what he has to do to take care of that.

“I don’t think we’re that far away,” he added. “People use ‘rebuilding’ too loosely.”

“I was flip-flopping,” he admitted. “It was hard. It was Chicago, but then after I met with L.A., it was L.A. But it came back to Chicago — and was pretty much always Chicago or New York. That’s a situation where I could have walked in now to an opportunity to compete for the next however many years.” […] “It’s a matter of me believing in the organization, believing in Phil,” Anthony said. “I wanted to go somewhere where I can end my career.”