Carmelo Anthony on Iman Shumpert and JR Smith Playing for Cavaliers: ‘LeBron Took All My Family From Me’ 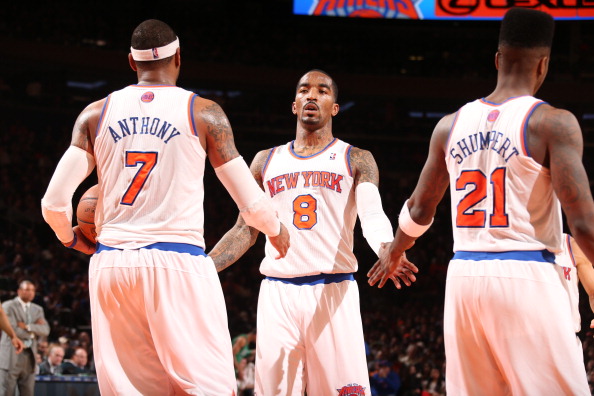 Carmelo Anthony had a strong relationship with both Iman Shumpert and JR Smith, former teammates of his on the Knicks. Last year, Shump and JR were dealt to the Cavs, and immediately became integral parts of a team that made the NBA Finals. Tonight, the Cavs host the Knicks, which means reporters found it timely to ask Melo if he misses his old crew. Here’s what he told Stefan Bondy of the NY Daily News:

Carmelo on Shumpert and JR not playing tonight: "I would love to play against my brothers. It seems like LeBron took all my family from me."

Interestingly, Melo actually holds a 12-11 advantage over LeBron in their head-to-head matchups over their careers. Then again, Melo knows that stat rings hollow given their huge difference in postseason success:

Carmelo Anthony is not surprised he holds an above-.500 record against LeBron (12-11), but "it don't mean s**t until the playoffs."

The Knicks and Cavaliers tip off at 8 p.m. ET on ESPN tonight.